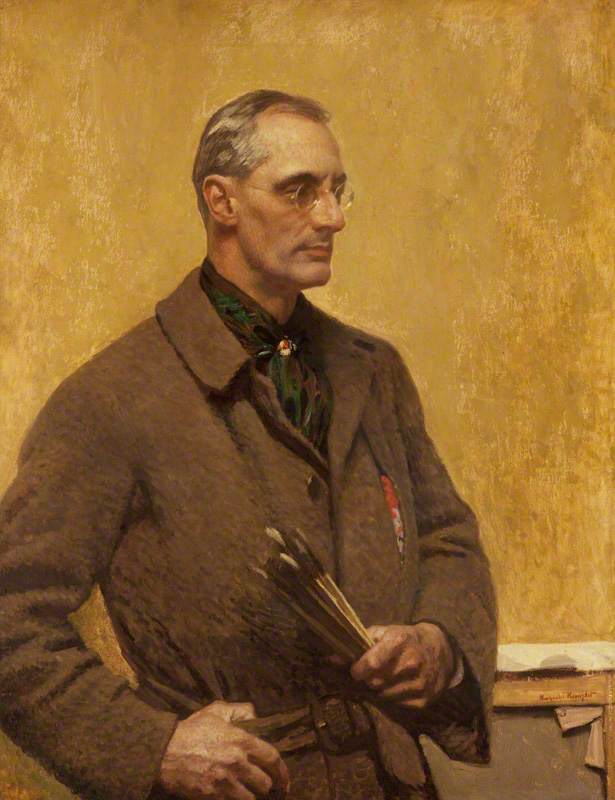 Painter of sensitive portraits, especially of women, and interiors, born in Nottingham. In the mid-1890s he studied at the local School of Art; also studied in Paris at Académie Julian, his teachers including Jean-Paul Laurens and Benjamin Constant. Knight married Laura Johnson – later to become Dame Laura Knight – the painter, in 1903, having known her in Nottingham and in Staithes, Yorkshire, where he painted on his return from France. With her he studied the Dutch masters in the Netherlands, then from 1908 they lived for a decade in Newlyn, Cornwall, eventually settling in London. Knight was a steady exhibitor at RA from 1896, being elected RA in 1937. Also showed Leicester Galleries, IS and elsewhere. His reticent work and personality were overshadowed by Laura’s ebullient, more colourful nature and painting, but his pictures’ real qualities have been more appreciated in recent years.

Artist's website
Oxford Dictionary of National Biography
Painter, born in Nottingham, the son of William Knight, an architect and amateur painter. He studied at Nottingham School of Art where he won a travelling scholarship which enabled him to further his studies in Paris, 1893-94 at the Académie Julian. He met Laura Johnson, a fellow student at Nottingham School of Art, and married her in 1903. He first exhibited at the RA in 1896 and had his first joint exhibition with his wife at the Leicester Galleries, 1906. With his wife they lived and worked at Staithes, Yorkshire, where they were active members of the Staithes Group of Artists. They also made several working trips to Holland painting at the artists' colony of Laren located about 20 miles south-east of Amsterdam. Harold and Laura relocated to Newlyn, Cornwall in 1908 and joined the artists' colony there known as the Newlyn School.

The following year he undertook a series of paintings of women in interiors, a subject dear to him all his life. He was a conscientious objector during World War I and in 1919 he and his wife moved back to London. In the capital, Harold Knight continued as a portrait painter of well-known society figures and in 1925 was awarded a Silver Medal for his portrait of Ethel Bartlett at the Paris Salon. He was elected President of the Nottingham Society of Artists, 1936-1946 and he exhibited regularly at the RA and RP. He was elected an Associate of the RA, 1928, and RA, 1937, each time a year after his wife. He also exhibited at the Leicester Galleries, ROI, RP, RWA and NSA. Examples of his work are in the collections of art galleries in Auckland, Brisbane, Dunedin, Perth, Wellington, the Royal Cornwall Museum, Truro, Penlee House Museum, Russell-Cotes Art Gallery & Museum, Bournemouth, Nottingham Art Gallery, Brighton & Hove Art Gallery and the Tate Gallery, London.