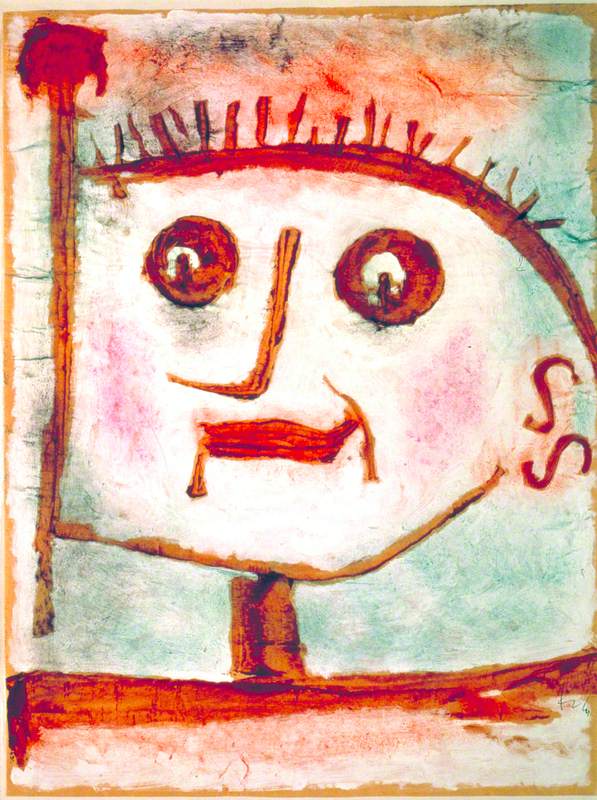 (b Munchenbuchsee, nr. Berne, 18 Dec. 1879; d Muralto, nr. Lucarno, 29 June 1940). German-Swiss painter, printmaker, teacher, and writer on art, one of the most individual and best-loved figures in 20th-century art. He is often referred to as Swiss (his mother's nationality), but he held German citizenship (through his father) all his life. From 1898 to 1901 he studied in Munich, principally at the Academy under Franz von Stuck. After travelling in Italy, 1901–2, he lived in Berne for the next four years, then in 1906 moved to Munich after marrying the German pianist Lily Stumpf (both Klee's parents were musicians and he was himself a violinist of professional standard). In 1911 he became friendly with Jawlensky, Kandinsky (whom he had first met as a student ten years earlier), Macke, and Marc, and in the following year he took part in the second Blaue Reiter exhibition.

Read more
Also in 1912 he visited Paris for the second time (he had earlier been there with Louis Moilliet in 1905); he met Delaunay on this occasion and saw Cubist pictures. At this point he was principally an etcher, his most notable prints including a series of eleven Inventions (1903–5)—bizarre and satirical works with freakishly distorted figures. However, in 1914 he visited Tunisia with Macke and Moilliet and was dramatically awakened to the beauty of colour. Two weeks after arriving he wrote: ‘Colour possesses me. I no longer need to pursue it: it possesses me forever, I know. Colour and I are one—I am a painter.’ During the war he served in the German army, engaged for part of the time on painting aeroplane wings. After the war he returned to Munich, and a large exhibition of his work there in 1919 secured his reputation and led Gropius to invite him to teach at the Bauhaus; he took up the appointment in 1921 and remained with the school for the next ten years, proving an inspired, undogmatic teacher who was enormously popular with his students. However, he found the internal disputes at the school increasingly tiresome and in 1931 he moved to the Düsseldorf Academy. He was dismissed from this post by the Nazis in 1933 and left Germany for Berne; four years later works by him were included in the notorious exhibition of degenerate art.Although Klee was not politically inclined, his mood during his last years was one of profound disappointment. In 1935 he suffered the first symptoms of the illness that killed him—a rare debilitating skin disease called scleroderma—and although he remained highly productive to the end, his earlier playfulness gave way to a preoccupation with malign and malevolent forces. His exquisitely sensitive line grew deliberately rough and crude and his sense of humour became macabre; his imagery was haunted by premonitions of death, as in Death and Fire (1940, Paul Klee Foundation, Kunstmuseum, Berne), one of his starkest and most powerful works. It depicts a ghastly, ashen face, the features of which are made up of letters forming the word Tod (Ger.: ‘death’). Klee was one of the most inventive and prolific of modern masters, his complete output being estimated at some 9,000 works. He usually worked on a small scale; initially he painted only in watercolour, but he took up oils in 1919 and sometimes used both media in one painting. It is impossible to categorize his work stylistically, for he moved freely between figuration and abstraction, absorbing countless influences and transforming them through his unrivalled imaginative gifts as he explored human fantasies and fears. In spite of this variety, his work—in whatever style or medium—is usually instantly recognizable as his, revealing a joyous spirit that is hard to parallel in 20th-century art. Various collections of his writings (including his notebooks and diaries) have been published. The best-known individual work is Pädagogisches Skizzenbuch, published in 1925 and translated into English as Pedagogical Sketchbook (1953).