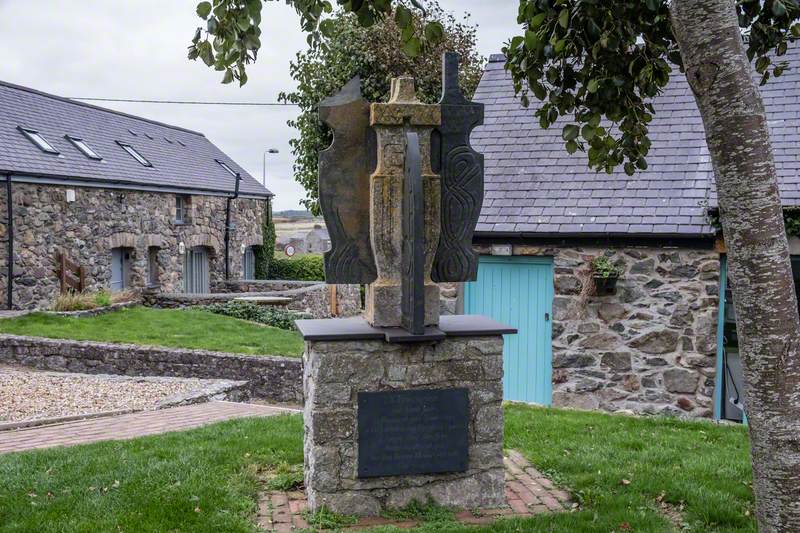 Sculptor, letterer, teacher and writer, born in East Boldon, County Durham. He was educated at Jarrow Secondary School and managed to snatch part-time instruction at King Edward School of Art in Newcastle upon Tyne. After war service he suffered from pulmonary tuberculosis. In 1949 Jones worked in Eric Gill’s workshops, about two years later setting up on his own in northwest Wales. He used slate as his principal medium and believed that fine art should be practised as a craft in a local community. For a while he was director of the National College of Art and Design in Dublin and he lectured in sculpture at the British School in Rome, but was mainly a working sculptor participating in a range of group shows, including RCamA, WAC and NWG. A few one-man shows were held, but much of Jones’ work appeared in public locations, such as the depictions of Mercy and Justice on the Law Courts in Mold and his sculpture on the theme of Peace for the Emrys ap Iwan School at Abergele.

Read more
Among his major inscriptions are those to David Lloyd George and Dylan Thomas in Westminster Abbey. His portrait busts included the architect Clough Williams-Ellis and the writer John Cowper Powys. Jones scripted several television films; his novel A Tree May Fall was published in 1980 and a book on The Lakes of North Wales in 1983. There was a retrospective at St David’s Hall, Cardiff, in 2002. CASW holds his work. Lived at Minffordd, Penrhyndeudraeth, Gwynedd, later in Cardiff.