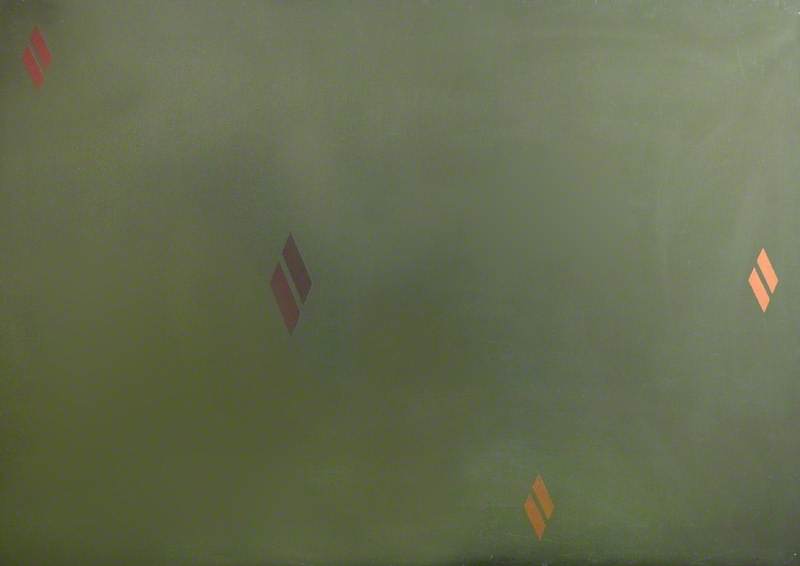 Leicestershire County Council Artworks Collection
British painter, graphic artist, and designer. She studied at *St Martin's School of Art, 1954–7, and the *Slade School, 1957–60. From 1964 to 1968 she taught at Hornsey College of Art, London, and subsequently at the Slade School. Her work is abstract, using geometrical shapes subtly arranged and typically painted in soft colours. Sometimes they form a kind of irregular grid evoking the decorative patterns of Islamic architecture (Minaret, 1967, Graves Gallery, Sheffield). Her own decorative work includes commissions on an architectural scale, notably a floor for Victoria Station, London (1980). She says that what she is trying to suggest in her work is ‘the sense of all experience of life being part of a whole, perceptible only in flashes and fragments’.

Painter, printmaker and teacher who studied at St Martin’s School of Art, 1954–7, then Slade School of Fine Art, 1957–60. In 1960 she gained an Abbey Minor Travelling Scholarship, the following year winning a French Government Scholarship. Had her first solo show at Grabowski Gallery in 1963. Jaray taught at Hornsey College of Art, 1964–8, then at Slade School of Fine Art. Further solo shows included Graves Art Gallery, Sheffield, in 1972, and the same year at Bristol City Art Gallery; Angela Flowers Gallery in 1976; key shows at Whitworth Art Gallery, in Manchester, and Ashmolean Museum, Oxford, in the mid-1980s; and Purdy Hicks Gallery, 2003. Jaray’s work was abstract, concerned with suggestive interactions of colour and form in complex patterns. Examples are held by Tate Gallery, Arts Council and other major collections in Britain and abroad. Jaray completed designs in brick for public spaces. Her works included the forecourt of Victoria Station, 1980; oriental carpet-making in the centre of Birmingham, 1991; a cruciform design outside Wakefield Cathedral, 1989–94; Stickley, in Stoke-on-Trent; and Jubilee Square, outside Leeds General Infirmary, 1995–9; and the forecourt of the new British Embassy, Moscow, 2001. Jaray produced a series of screenprints based on W G Sebald’s 1997 volume The Emigrants. Married to the artist Marc Vaux and lived in London.