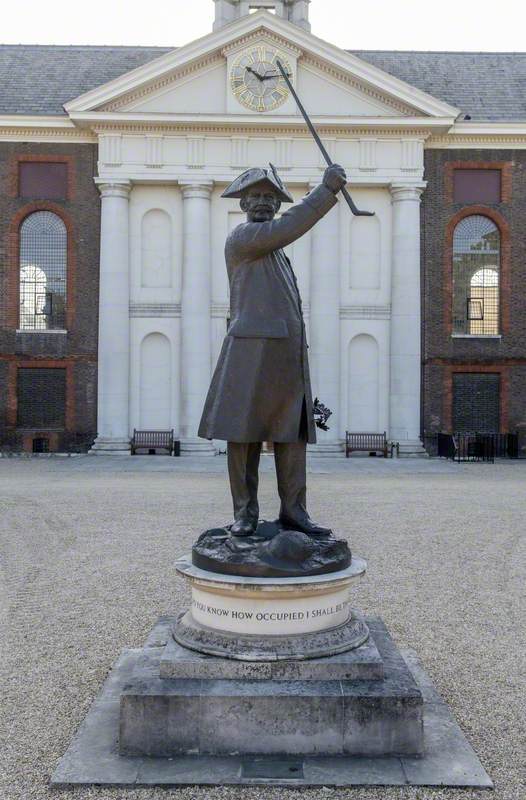 Sculptor, born in Inverness, Scotland. He studied at Farnham School of Art and worked for Henry Moore. He became a fellow of RBS in 1989, and from 1990–4 was its vice-president. In 1990 he won the Society’s silver medal and in 1991–2–3 the Sir Otto Beit Medal for Excellence in Sculpture, also in 1993 winning the Jersey, Channel Islands, Liberation Sculpture Competition. In 1991 Jackson won the Mozart Bicentenary Sculpture Competition, London’s first sculpture of the composer whose Don Giovanni inspired Jackson’s Masked Figure series. One of Jackson’s more notable works was The Yomper, a unique casting by The Morris Singer Foundry for the Royal Marines Museum, Portsmouth, commemorating the men of 45 Commando’s epic march in the Falklands in 1982.

Read more
Jackson’s powerful group The Struggle for Peace and Freedom, 1987, is in St Peter’s Square, Manchester, and London, Geneva and Monte Carlo also have examples. Jackson showed widely solo and in group exhibitions, having a notable one-man show at Philharmonic Center for the Arts, Naples, Florida, America, in 1998. His sculptures were displayed at Abbey House Gardens, Malmesbury, in 2001. In 2002 Jackson was commissioned by the Crown Estate and RBS to complete a £300,000, three-tonne bronze statue of H M The Queen on horseback for Windsor Great Park, to mark her Golden Jubilee. The one-and-a-half times lifesize figure, the first public statue of her in Britain, was unveiled in 2003. Earlier that year Jackson’s statue of Bobby Moore, West Ham captain, and other members of the 1966 England football World Cup-winning team, was unveiled at Upton Park. Retrospective at Bishop’s Palace, Wells, in 2006. Jackson lived in Midhurst, Sussex.