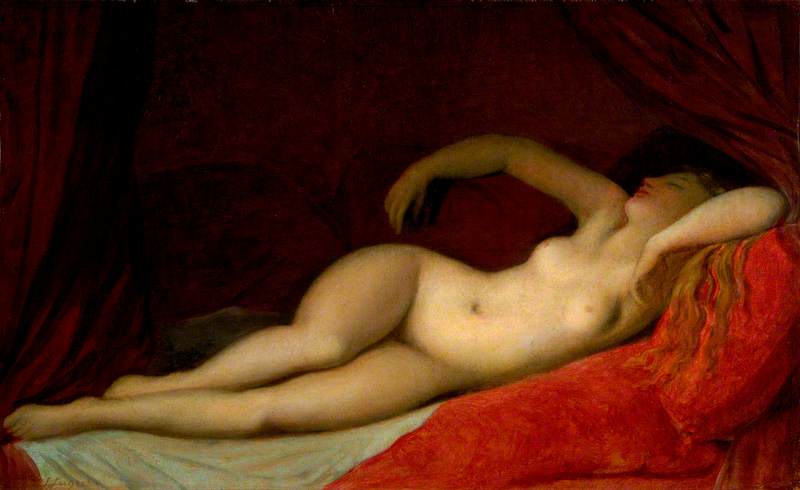 (b Montauban, 29 Aug. 1780; d Paris, 14 Jan. 1867). French painter, the son of a minor painter and sculptor, Jean-Marie-Joseph Ingres (1755–1814). After early training in the Toulouse Academy he moved to Paris in 1797 to study in Jacques-Louis David's studio. He won the Prix de Rome in 1801, but because of the unsettled political situation in France his departure for Italy was postponed until 1806. In the interval he produced his first portraits. These fall into two categories: portraits of himself and his friends, often Romantic in spirit (Self-Portrait, 1804, Mus. Condé, Chantilly); and portraits of well-to-do clients characterized by purity of line and enamel-like colouring (Mlle Rivière, 1805, Louvre, Paris). Their expressive contours have a sensuous beauty of their own beyond their function to contain and delineate form, and this was characteristic of Ingres's painting throughout his life.

Read more
During his first years in Rome Ingres continued to execute portraits and began to paint bathers, a theme that was to become one of his favourites (Valpinçon Bather, 1808, Louvre). When his four-year scholarship ended, he decided to stay in Rome, where he earned his living mainly with pencil portraits of visitors to the city (several hundred of these survive—marvels of delicate draughtsmanship, although Ingres himself was disparaging about them). His more substantial commissions of this period included two decorative paintings for Napoleon's palace in Rome (Triumph of Romulus over Acron, 1812, École des Beaux-Arts, Paris; and Ossian's Dream, 1813, Mus. Ingres, Montauban). In 1820 he moved from Rome to Florence, where he remained for four years, working mainly on his Raphaelesque Vow of Louis XIII, commissioned for the cathedral of Montauban. Ingres's work had often been severely criticized in Paris because of its ‘Gothic’ distortions, and when he accompanied this painting to the Salon of 1824 he was surprised to find it acclaimed and himself set up as the leader of the academic opposition to the Romanticism exemplified by Delacroix (whose Massacre at Chios was shown at the same Salon). Ingres stayed in Paris for the next ten years and received the official success and honours he had always craved. During this period he devoted much of his time to executing two large works: the Apotheosis of Homer, for a ceiling in the Louvre (installed 1827), and the Martyrdom of St Symphorian (shown at the 1834 Salon) for the cathedral of Autun. After the latter painting was badly received, however, he accepted the directorship of the French Academy in Rome, a post he held from 1835 to 1840. He was a model administrator and teacher, greatly improving the academy's facilities, but he produced few major works in this period. In 1841 he returned to France, once again acclaimed as the champion of traditional values. He was heartbroken when his wife died in 1849, but he made a happy second marriage in 1852, and he continued working with great energy into his eighties. In this final period he produced some of his best portraits (Madame Moitessier, 1856, NG, London), and one of his acknowledged masterpieces dates from the last years of his life, the extraordinarily sensuous Turkish Bath (1863, Louvre). At his death he left a huge bequest of his work (several paintings and more than 4,000 drawings) to his home town of Montauban and they are now in the museum bearing his name there.Ingres' career is full of contradictions. By the end of his life he was perceived as the great upholder of the French classical tradition, yet he had spent much of his early career obstinately persisting with work that was unappreciated in Paris. In his way of life he was bourgeois, but as Baudelaire remarked, his finest works ‘are the product of a deeply sensuous nature’. The central contradiction of his career is that although he was held up as the guardian of classical rules and precepts, it is his personal obsessions and mannerisms that make him such a great artist. His technique as a painter was academically unimpeachable—he said paint should be as smooth ‘as the skin of an onion’—but he was often attacked for the expressive distortions of his draughtsmanship: critics said, for example, that the abnormally long back of La Grande Odalisque (1814, Louvre) had three extra vertebrae. Unfortunately his influence was mainly seen in those shortcomings and weaknesses that have come to be regarded as the hallmark of inferior academic work: he had scores of admiring pupils, but Chassériau was the only one to attain distinction. In terms of calligraphic draughtsmanship, his true successors were Degas and Picasso.