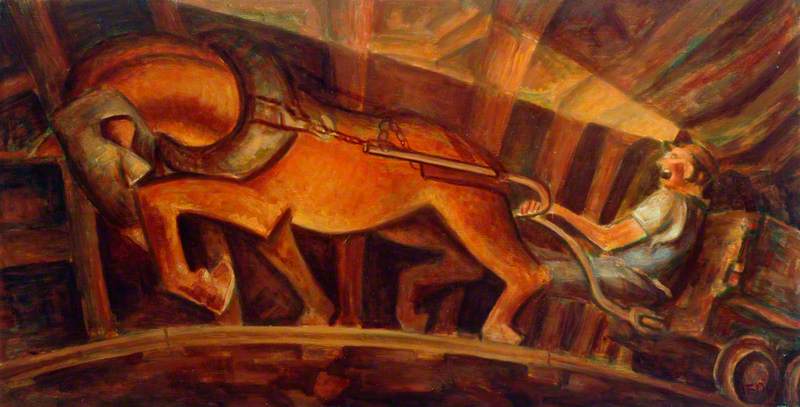 Painter and draughtsman who worked at the Yniscedwyn Colliery, Glamorgan, living nearby at Glanrhyd. Ifold’s father died when Cyril was eight and to help support the family he delivered newspapers and began picking coke at a tin-plate factory before joining a local colliery. Aged about 15, Ifold began until he was about 23 taking lessons in anatomy from Arthur Pawson, a retired art teacher. During World War II Ifold briefly studied with Alfred Janes at Swansea Art School.

Read more
When a friend from the School took him to see the Polish émigré artist Josef Herman at Ystradgynlais Ifold saw the direction that his work should take. After initial coolness about his portfolio, Herman later told Ifold’s mother that Cyril had great potential. Despite rejection by organisers of the RA Summer Exhibition, where Ifold’s grandfather Frederick Ifold had shown regularly in the mid-1800s, encouragement from his wife and from David Bell, curator of the Glynn Vivian Art Gallery, Swansea, prompted Cyril to continue painting after work in the pit. Few of his early pictures survive. Works that do show a range of influences, from seventeenth-century Dutch genre and still life paintings to Cézanne and the Futurists. After Ifold died during his first major solo show at Glynn Vivian, his widow withdrew work from sale and had it returned to their home in Seven Sisters, near Neath. His pictures were featured in Miner-Artists: The Art of Welsh Coal Workers, National Museum & Gallery, Cardiff, 2000.