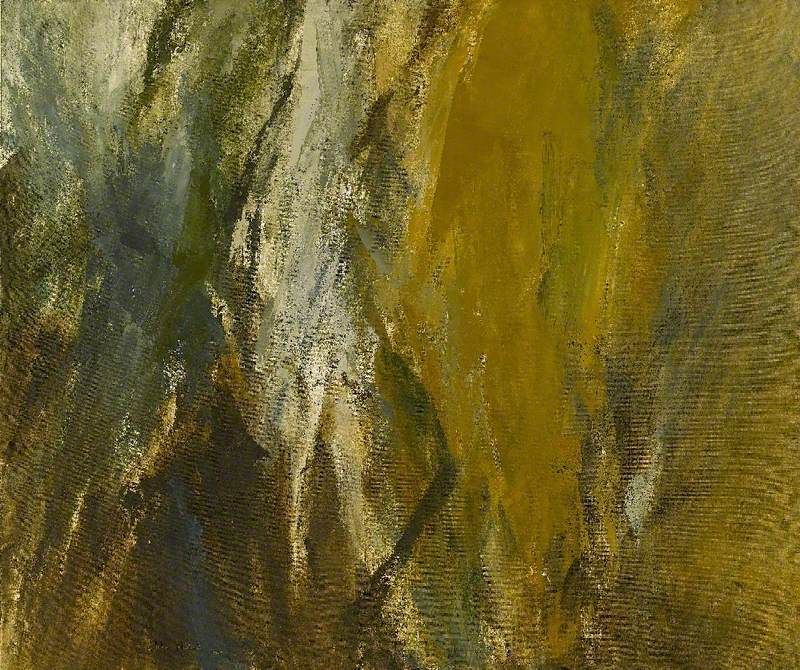 Painter, designer and printmaker, born at Ridgefield, Connecticut, America. He studied at Harvard University, 1950–3, completed three years’ military service including time in Japan, then in 1956–8 studied at Art Students’ League of New York and with Hans Hofmann. From 1958–60 Hubbard lived in Rome and travelled through Europe, then moved to Dorset in 1961, settling in Chilcombe. Among a wide variety of activities Hubbard in 1968 designed décor and costumes for Dutch National Ballet’s Le Baiser de la Fée; in 1983 designed décor for the Royal Ballet’s production Midsummer; in 1985 painted the backcloth for Sylvia pas de Deux for the same company; was in 1988 invited resident artist at Poet’s House, New Harmony, Indiana; then in 1990 was guest in Malaysia of the National Gallery of Malaysia.

Read more
Group exhibitions included The Sea at Laing Art Gallery, Newcastle upon Tyne, 1986; Forces of Nature at Manchester City Art Gallery and tour, 1990–1; and John Moores Liverpool Exhibition, 1991–2. He won the Jerwood Prize for Painting in 1996. Hubbard’s first solo show after moving to England was at New Art Centre in 1961, after which he added many international one-man exhibitions. He had a series of shows with Fischer Fine Art from 1984, after a retrospective at Warwick Arts Trust, 1981, another following at Yale Center for British Art, New Haven, Connecticut, 1986. Latterly exhibited with Marlborough Fine Art and had shows at New Art Centre Sculpture Park and Gallery, East Winterslow, 2002, and Six Chapel Row Contemporary Art, Bath, 2003. Tate Gallery, Scottish National Gallery of Modern Art, British Council and other public collections hold his work. Hubbard won the Jerwood Prize in 1996.