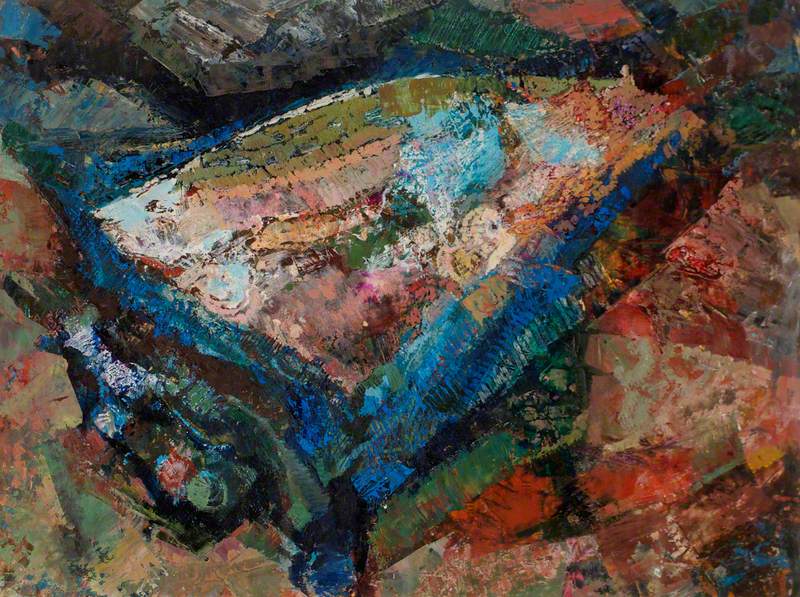 Painter, especially in gouache, draughtsman, mosaicist and muralist, writer and poet, born in Lambourn, Berkshire, as Rosemary Howard-Jones. She was educated at St Hilda’s School, Penarth, and the London Garden School, then the Slade School of Fine Art from the age of 17 for four years. From the late 1930s through World War II she led a varied life, working as an archaeological draughtsman at National Museum of Wales, Cardiff; helped the unemployed and deprived children in the city; with the composer Gomer Llewellyn ran the East Moors Theatre; with Coastal Defence recorded fortified islands in the Bristol Channel; and was a Royal Navy war artist recording loadings for D-Day. After the war moved to London and worked as a medical draughtsman.

Read more
In 1946 attended Patrick Allan-Fraser School of Art, Hospitalfield, Arbroath, under James Cowie. Although based in London, Howard-Jones in later years travelled as far as Spain, Cyprus and America and was especially associated with west Wales and the islands offshore. From 1949–58 she spent long periods on the tiny island of Skomer. Nature and a deep inner spiritual life and Celtic mystery and legends were sources of inspiration. Her mosaics include one for Thomson House, Cardiff, 1958; another for Grange Church, Edinburgh, 1964–5. Published Poems and Stories, 1968. Howard-Jones had a first solo exhibition at Bloomsbury Gallery, 1935. Regular shows followed, including Leicester Galleries, 1964, where she was a frequent exhibitor; there was a WAC retrospective and tour, 1974; a West Wales Arts retrospective, 1983; one put on by West Wales Arts Centre, Fishguard, 1992; another by Rocket Press in 1993; and Tenby Museum and Art Gallery, 2002. Imperial War Museum, WAC and National Museum of Wales hold examples, commonly signed Ray.