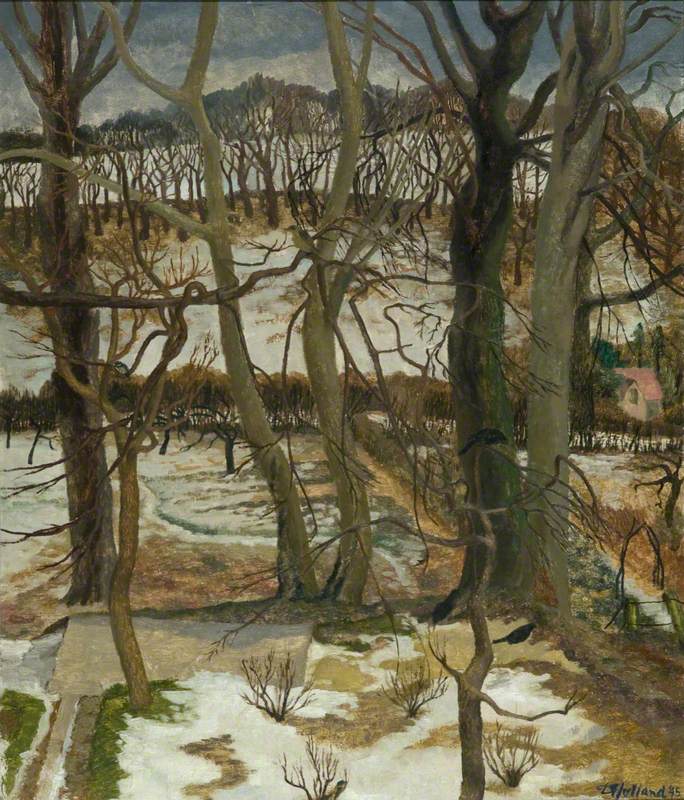 Painter, muralist, designer, printmaker and teacher whose work had a Neo-Romantic tinge and a strong sense of design. Holland was educated at Kingston Grammar School, Chelsea and Willesden Schools of Art. He was awarded a Royal Exhibition to the Royal College of Art, 1936, which he refused, preferring to paint on his own. Taught design, painting and drawing at Willesden, Harrow and Goldsmiths’ College Schools of Art, then was appointed principal of York School of Art, 1949, of Guildford School of Art, 1951. He completed mural decorations for Cunard Line, schools and libraries. Exhibited at RA from 1937, also with NEAC, LG, with Redfern Gallery and in touring shows. In 1950 he shared an exhibition with Austin Wright at York City Art Gallery which holds his work, as does the Arts Council.

Read more
Holland was killed when his motorcycle hit a lorry; he was rushed to Kingston Hospital but was dead on arrival. One version says that Holland would not have used the motorcycle again, as he was on the way to collect a new car. Another that he was furious at a wrongly detrimental inspector’s report and by mistake tipped the lorry. Lived at Hale, near Farnham, Surrey. Abbott and Holder latterly sold Holland’s work.