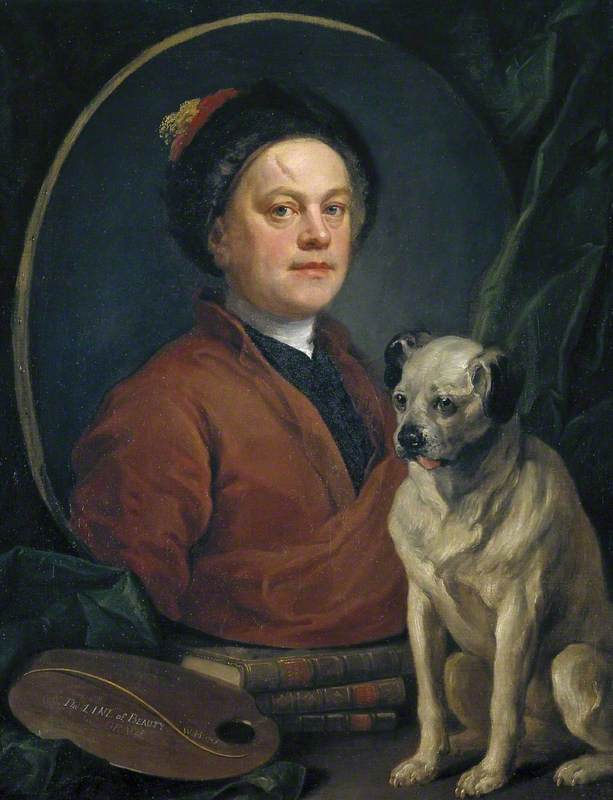 (Born London, 10 November 1697; died London, 25/26 October 1764). English painter and engraver, the outstanding British artist of his period. During his childhood, his father, a schoolteacher, was imprisoned for debt, and this early experience of the seamy side of life left a deep mark on Hogarth (much of his output is concerned with the contrast between success and failure, and he depicted prisons in several works). He trained as an engraver of silver plate and by 1720 had set up his own business in London, doing various kinds of commercial work. In his spare time he studied painting, first at the St Martin's Lane Academy and later under Sir James Thornhill, whose daughter he married in 1729.

Read more
By the early 1730s he had achieved some success as a painter of conversation pieces and at about the same time he invented the idea of using a sequence of anecdotal pictures ‘similar to representations on the stage’ to point a moral and satirize social abuses. A Harlot's Progress (6 scenes, c.1731; destroyed by fire) was followed by A Rake's Progress (8 scenes, c.1735, Soane Mus., London) and Marriage à la Mode (6 scenes, c.1743, NG, London), each of them unfolding a cautionary tale of vanity, corruption, and betrayal leading to decline and death. Hogarth produced all three series with a view to engraving them, and the prints had a wide sale and were popular with all classes. They were indeed so successful that unauthorized copies were marketed, and Hogarth's campaigning against the profiteers led to the Engravers' Copyright Act of 1735, which made such copies illegal. In addition to engravings based on his paintings, he produced many independent prints, among them Industry and Idleness (twelve scenes, 1747), Beer Street and Gin Lane (1751), and The Four Stages of Cruelty (four scenes, 1751). There is a good deal of witty observation in his work, but he could also be brutally direct when moved by undeserved suffering: The Four Stages of Cruelty ‘were done in the hopes of preventing that cruel treatment of poor animals which makes the streets of London more disagreeable to the mind than anything whatever’.

Hogarth wrote of his ‘modern moral subjects’ that ‘I have endeavoured to treat my subjects as a dramatic writer: my picture is my stage, and men and women my players.’ However, he was much more than a preacher in paint. His satire was directed at pedantry and affectation as well as at immorality, and he saw himself to some extent as a defender of native common sense against a fashion for French and Italian mannerisms (he dismissed contemporary foreign artists as ‘picture-jobbers from abroad’). In spite of his xenophobia, he made some attempts to show he could paint in the Italian Grand Manner, including a huge altarpiece for St Mary Redcliffe, Bristol (1755–6, now City AG, Bristol). These, however, are now generally considered his weakest works, and apart from his morality subjects he excelled mainly in portraiture. Captain Coram (1740, Foundling Mus., London), which he regarded as his highest achievement in this field, shows that he could paint a portrait in the Baroque manner with complete confidence and without artificiality. However, wealthy clients generally preferred bland flattery to Hogarth's robust directness, so he was not a financial success as a portraitist.

In 1735 he established an academy in St Martin's Lane (a successor to the one at which he had studied), and this became an important forerunner of the Royal Academy. In 1753 he published The Analysis of Beauty, a treatise on aesthetic theory written with the conviction that the views of a practising artist should carry greater weight than the theories of the connoisseur or dilettante. It reveals him as an original if somewhat muddled thinker.

Hogarth was far and away the most important British artist of his generation. He was equally great as a painter and engraver and by the force of his pugnacious personality as well as by the quality and originality of his work he freed British art from its domination by foreign artists. Moreover, he gave a focus to this burgeoning national spirit in art by persuading his fellow artists—including Francis Hayman, Thomas Hudson, Allan Ramsay, Samuel Scott, and Richard Wilson—to present examples of their work to London's famous Foundling Hospital (established in 1739 by his friend Thomas Coram), where they could be seen by the public; in effect, if not in name, it was Britain's first public art gallery. Because so much of his own work has a ‘literary’ element, his qualities as a painter have often been overlooked, but his more informal pictures in particular show that his brushwork could live up to his inventive genius. The vigour and spontaneity of The Shrimp Girl (c.1740, NG, London), for example, have made it deservedly one of the most popular British paintings of the 18th century.