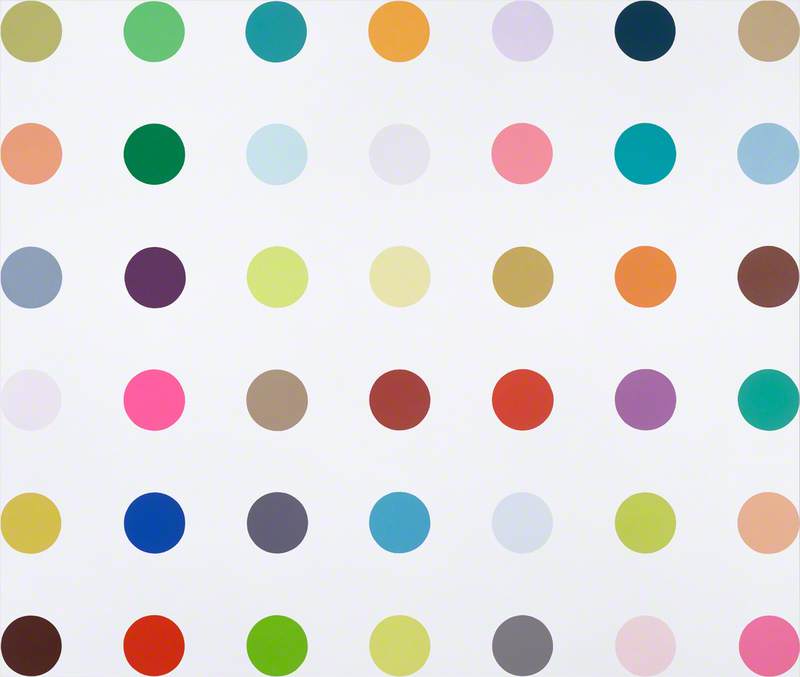 (b Bristol, 7 June 1965). British sculptor, painter, and designer, whose flair for self-publicity has helped him become probably the most famous and controversial British artist of his generation (Tracey Emin being his only serious rival in this regard). While still a student at Goldsmiths College, London, he made a name for himself by organizing a exhibition of student work (‘Freeze’, 1988). From his youth he had a fascination with death, and his most famous work is The Physical Impossibility of Death in the Mind of Someone Living (1991, priv. coll.), consisting of a dead tiger-shark balanced and weighted so that it floats in preserving fluid in a large tank made of glass and steel. In 1995 he was awarded the Turner Prize. The work he showed at the exhibition of shortlisted candidates' work at the Tate Gallery was Mother and Child Divided, consisting of four tanks containing the severed halves of a cow and calf.

Read more
According to the accompanying catalogue, ‘Hirst strips the closest of bonds between living creatures to its starkest reality’, but many people hated the work, and a letter to The Times suggested that the Tate authorities must be suffering from mad cow disease. His most characteristic paintings consist of rows of coloured spots. His recent work includes For the Love of God (2007), a platinum cast of a human skull encrusted with diamonds; it is said to have been sold to an investment group for £50,000,000. See also Young British Artists.

Artist, born in Yorkshire, who attended Jacob Kramer College of Art, Leeds, 1983–4, then Goldsmiths’ College, 1986–9. His group show appearances included Whitworth Young Contemporaries, Manchester, 1987; Freeze, at PLA Building, 1988; New Contemporaries, at ICA, 1989; and Modern Medicine and Gambler, both at Building One, 1990. In 1994 Hirst curated Some Went Mad, Some Ran Away at the Serpentine Gallery, by which time he had become famous, in the words of critic Andrew Graham-Dixon, as the “virtuoso of dead animals and flies, the man who sold Charles Saatchi a tiger shark suspended in formaldehyde”, for the Saatchi Collection. Hirst’s winning entry for the Turner Prize, 1995, Mother and Child Divided, showed a cow and calf bisected longitudinally and presented in a glass case. It was said to explore the themes of mortality and isolation. Hirst also exhibited two of his spot paintings, white canvases covered with a slightly irregular grid of coloured circles. In 1996 BBC 2 Television showed Hanging Around, a dark comedy written and directed by Hirst. Other diversifications included the setting up of a record label, Turtleneck, which recorded the 1998 World Cup song Vindaloo, by Fat Les; providing designs for, Pharmacy, one of his two London restaurants (the other being Quo Vadis); a £1m publishing project, with Canongate Books, in which Hirst designed a limited edition of Robert Sabbag’s 1976 cult classic Snowblind, about an American cocaine dealer; and the creation in 2002 of one of his coloured dot paintings, to be used in the Beagle 2 Mars space shot. Later solo exhibitions included Gagosian Gallery, New York, America, 2000, and a retrospective at The Saatchi Gallery and shows at White Cube, all 2003. From the Cradle to the Grave: Selected Drawings by Damien Hirst appeared in 2004. Hirst had headquarters in London but lived in Devon. In 2005 Hirst bought the 124-acre Toddington Manor Estate, in Gloucestershire, including a Grade 1-listed, 300-room mansion which had stood empty for 20 years, aiming to create a museum to house his own work.