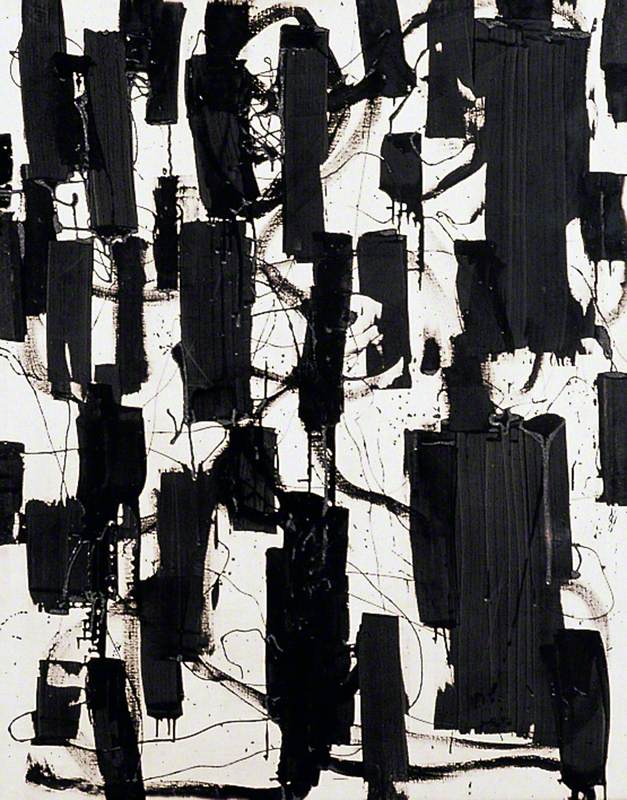 University of Chichester, Otter Gallery
(b Leeds, 30 Jan. 1920; d St Ives, 20 Mar. 1999). British painter, writer, and designer. His early paintings were influenced by Braque and Matisse, but in 1956 he turned to abstraction; in the same year he settled in Cornwall, becoming a member of the St Ives School. His abstracts were varied, including stripe paintings—vertical and horizontal—as well as looser formats with soft-edged shapes, but all his work is notable for its vibrant colour. He wrote several books, including The Changing Forms of Art (1955), The Shape of Colour (1973), and studies of Vlaminck (1947), Hitchens (1955), and Braque (1958).

Oxford Dictionary of National Biography
Biography on Oxford Art Online
Painter and art critic born at Headingly in Leeds, Yorkshire who lived in West Cornwall as a child, 1925-1929. He studied part-time at the Slade School, 1937-1939. During World War II, from 1940-44, Heron registered as a conscientious objector and worked as an agricultural labourer in Cornwall. After the cessation of the War he spent the next year working as an assistant at the Bernard Leach pottery in St. Ives. He started work as an art critic in 1945 and wrote in the New English Weekly, the New Statesman and Nation and continued to write for most of the rest of his life. He held his first solo exhibition at Downing's Bookshop, St. Ives, in 1947 and back in London in 1956 held his first major solo show at the Redfern Gallery. In 1953 he organised, wrote the catalogue and exhibited in ‘Space in Colour’ an exhibition of ten contemporary artists at the Hanover Gallery, London. From 1953-56 he taught at the Central School of Arts & Crafts and in 1955 published his first major book ‘The Changing Forms of Art’. From 1955-58 he was the London correspondent at the American magazine ‘Art Digest’ and in 1956 he moved into Eagle's Nest at Zennor, near St. Ives where he lived for the rest of his life. Heron was awarded the Grand Prize in the 2nd John Moores Liverpool Exhibition in 1959. He represented Britain in the 1965 VIII Bienal de São Paolo exhibition where he won a Silver Medal. Heron was created CBE in 1977 and from 1980-87 he was a Trustee of the Tate Gallery. He travelled extensively in America and Australia exhibiting and lecturing on both continents. He designed the coloured glass windows for the Tate St. Ives and was also responsible for the site specific outdoor installation at Stag Place in Westminster, London entitled 'Big Painting Sculpture'. Heron held retrospective exhibitions of his work at Hepworth Wakefield in 1952 (then known as Wakefield Art Gallery), Museum of Modern Art, Oxford in 1968, the Whitechapel Art Gallery in 1972 and at the Barbican Art Gallery in 1985. A major retrospective exhibition of his work was held at Tate Britain in 1998. Locally in his beloved Cornwall Heron showed with the short-lived Crypt Group and at the Newlyn Society of Artists as well as with the Marjorie Parr Gallery and the Arnolfini Gallery.