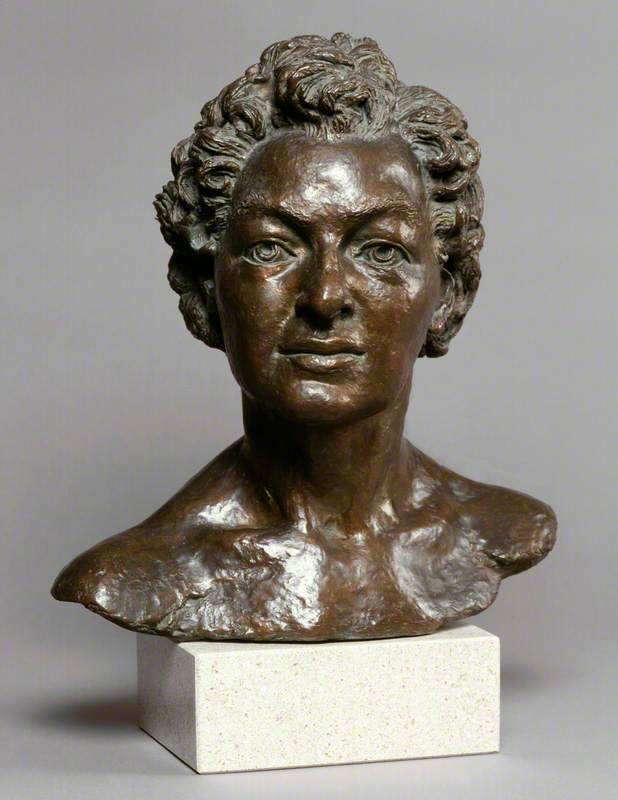 Sculptor, wood engraver, lino-cutter, illustrator and designer of great versatility. Born at Bromley, Kent, Gerts, as she was known to her friends, first wanted to be a farmer and worked for a year on the land in Essex. Then she had a year at Beckenham School of Art and a year in Germany to learn the language, followed by four years at Leon Underwood’s School of Painting and Sculpture at Hammersmith, 1922–6. In 1926 married the artist Blair Hughes-Stanton, divorced 1933. Was influenced by the work of Henri Gaudier-Brzeska and Brancusi and tribal sculpture in the 1920s and ’30s. First commission for a portrait bust was of the writer A P Herbert, in 1931, and she became noted for her busts of writers, such as Kathleen Raine (Tate Gallery) and David Gascoyne, and heads of children.

Read more
Worked for the Cresset Press, Gregynog Press and Golden Cockerel Press. During World War II went with her children to Canada and America, where precision drawing in shipyards and factories in black and white led to her turning to colour on return to England in 1945. She had taught at St Martin’s before the war, and after it taught at that school as well as Camberwell, the Central School and Royal Academy Schools. Elected RA in 1971. In 1981 the Academy gave her an eightieth birthday show. Ashmolean Museum, Oxford, held The wood-engravings of Gertrude Hermes and Blair Hughes-Stanton in 1995, Redfern Gallery holding a Hermes print retrospective in 2003. Hermes’ work has warmth, elegance and vitality, tinged with a functional spareness. Lived in London.

Although they divorced in 1933, they collaborated on several projects, including wood engravings for The Pilgrim’s Progress, published in 1928. She also collaborated with her friends Naomi Mitchison and Prunella Clough (1919–1999) to explore depictions of feminine desire.

The 1930s were a prosperous decade for Hermes, who exhibited for the first time at the Redfern Gallery in 1932. She also showed regularly at the RA from 1934, was elected a member of the LG in 1935, and in 1939 represented Britain at the Venice Biennale.

In the late 1940s to early 1950s, she taught at the Central School of Art, and became the first woman engraver to be elected a full member of the RA in 1971 – eventually receiving an OBE in 1981.