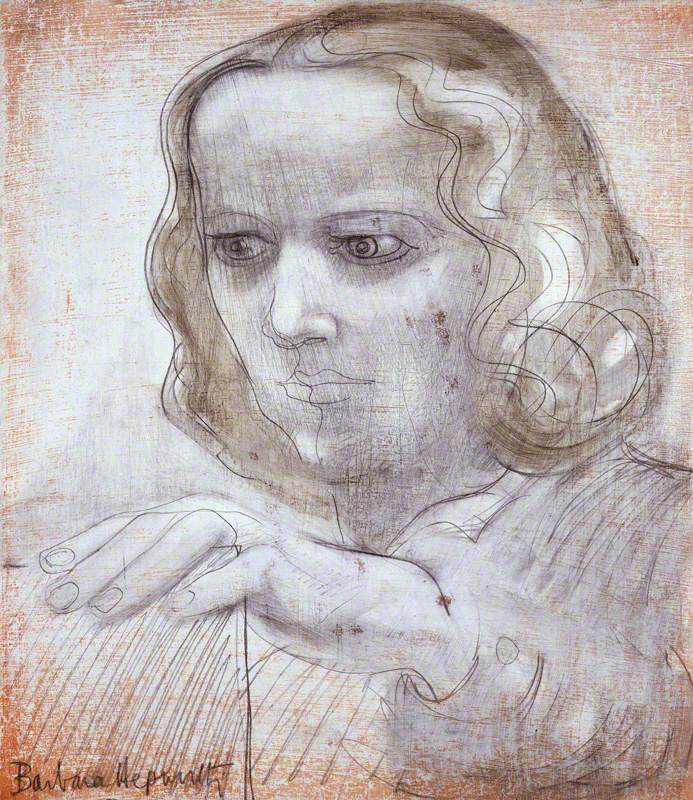 British sculptor, one of the most important figures in the development of abstract art in Britain. She was born in Wakefield, Yorkshire, the daughter of a civil engineer, and won scholarships to Leeds School of Art, 1919–21, and the Royal College of Art, 1921–24. Henry Moore was among her fellow students at both places and became a lifelong friend. In 1924 she came second to John Skeaping in the competition for the Prix de Rome, but she obtained a travelling scholarship and spent the years 1924–5 in Italy, marrying Skeaping in Rome in 1925 (they were divorced in 1933).

Read more
Her early sculptures were quasi-naturalistic and had much in common with Moore's work (Doves, 1927, Manchester Art Gallery), but she already showed a tendency to submerge detail in simple forms, and by the mid-1930s her work had become entirely abstract. At this time she worked in both stone and wood, and she described an important aspect of her early career as being ‘the excitement of discovering the nature of carving’ (she had learnt stone cutting in Italy). In this preference for direct carving she was united with Moore, but whereas his abstractions always remained based on natural forms, hers were often entirely non-representational. Yet Hepworth consistently professed a Romantic attitude of emotional affinity with nature, speaking of carving both as a ‘biological necessity’ and as an ‘extension of the telluric forces which mould the landscape’.

In 1931 Hepworth met Ben Nicholson and began living with him soon afterwards (they were married in 1938 and divorced in 1951). Through him she became more aware of contemporary European developments and more committed to abstraction. They joined Abstraction-Création in 1933 and Unit One in the same year. During the 1930s Hepworth, Nicholson, and Moore (who lived near them in Hampstead) worked in close harmony and became recognized as the nucleus of the abstract movement in Britain. Hepworth's outlook was already clearly formed in the short introduction she wrote for the book Unit One published in 1934: ‘I do not want to make a stone horse that is trying to and cannot smell the air. How lovely is the horse's sensitive nose, the dog's moving ears and deep eyes; but to me these are not stone forms and the love of them and the emotion can only be expressed in more abstract terms. I do not want to make a machine which cannot fulfil its essential purpose; but to make exactly the right relation of masses, a living thing in stone, to express my awareness and thought of these things…In the contemplation of Nature we are perpetually renewed, our sense of mystery and our imagination is kept alive, and rightly understood, it gives us the power to project into a plastic medium some universal or abstract vision of beauty.’

In 1939 Hepworth moved to St Ives in Cornwall with Nicholson (see St Ives School) and she lived there for the rest of her life. The Cornish landscape helped to reintroduce a suggestion of natural forms to her sculpture and the ancient standing stones of the region encouraged her to use upright forms, sometimes pierced, although ovoid shapes also remained characteristic of her work. She had introduced the use of the ‘hole’ to British sculpture in 1931 with Pierced Form (destroyed during the Second World War) and she now developed this with great subtlety, making play with the relationship between the outside and inside of a figure, the two surfaces sometimes being linked with threaded string, as in Pelagos (1946, Tate). The strings open up space without volume—in this she was influenced by Naum Gabo, who had joined her and Nicholson in Cornwall. Pelagos also shows her sensitive use of painted surface to contrast with the natural grain of the wood. By the 1950s Hepworth had an international reputation and in her later career she received many honours, including the main prize at the 1959 São Paulo Bienal, and numerous prestigious public commissions, among them the memorial to Dag Hammerskjöld—Single Form—at the United Nations in New York (1963).

From 1956 she worked more in bronze, especially for large pieces, but she always retained a special feeling for direct carving. However, like Moore, she made considerable use of assistants in her later years. She hated modelling and her bronze casts were all made from plaster, which she could carve: ‘I only learned to love bronze when I found that it was gentle and that I could file it and carve it and chisel it.’ Occasionally she diversified into other areas, notably with her sets and costumes for the first production of Michael Tippett's opera The Midsummer Marriage in 1955. Hepworth died tragically in a fire at her studio in St Ives, which is now a museum dedicated to her work. An art centre named after her opened in her native city of Wakefield in 2011.

At the time of her death she was generally regarded as the world's greatest woman sculptor, and her obituary in the Guardian described her as ‘probably the most significant woman artist in the history of art to this day’. She believed that the woman artist could add something distinctive to sculpture because of ‘a whole range of formal perception belonging to feminine experience…if I see a woman carrying a child in her arms it is not so much what I see that affects me, but what I feel within my own body’ (Whitechapel Art Gallery, ‘Barbara Hepworth Retrospective Exhibition’, 1954). In all her work she showed a deep understanding of the quality of her materials and superb standards of craftsmanship. Further Reading P. Curtis and A. G. Wilkinson, Barbara Hepworth: A Retrospective (1994) A. M. Hammacher, Barbara Hepworth (1987)