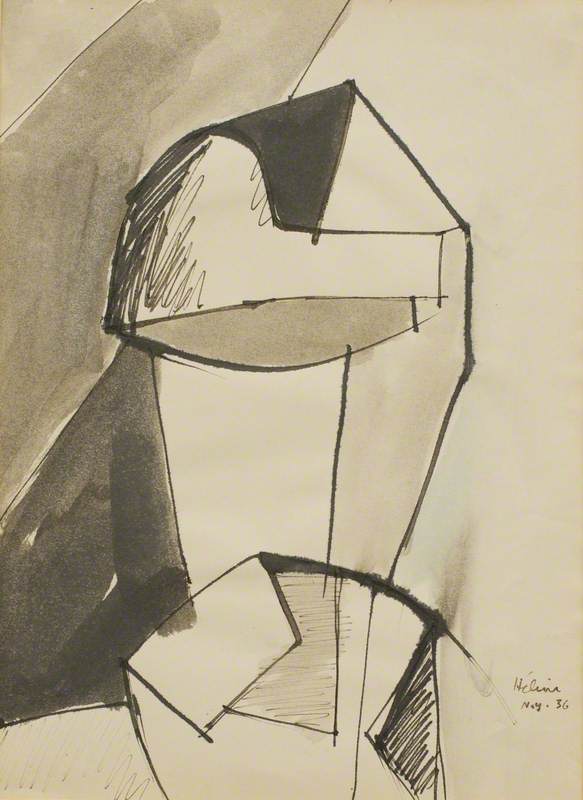 French painter, born at Couterne, Orne. In 1921 he moved to Paris, where he was apprenticed to an architectural firm. He began painting full-time—self-taught—in 1925. His early work—landscapes, portraits, still-lifes—was naturalistic, but he was soon influenced by avant-garde art. An enterprising and energetic man, he quickly gained many friends in the art world, including *Torres García, who introduced him to *Cubism. Hélion was also influenced by *Mondrian and by 1929 he was painting in an uncompromisingly abstract style. In 1930 he signed van *Doesburg's manifesto Art Concret (see Concrete art), and in 1931 he was a founder member of the *Abstraction-Création group. Hélion's most characteristic works were done during the next few years—broadly patterned geometrical abstractions with strangely curving tube-like forms recalling the mechanistic paintings of *Léger (Île de France, 1935, Tate).

Read more
Following visits to New York in 1932 and 1934, Hélion moved to the USA in 1936 (dividing his time between New York and Virginia), becoming an important link between the European and American avant-gardes. In 1940 he returned to Europe to join the French army. He was taken prisoner but escaped and made his way back to America, where he published an account of his experiences, They Shall Not Have Me, in 1943. While there he also made contact with *Surrealist exiles including *Ernst, *Duchamp, and *Breton. After the war he returned to France and, disillusioned by the Utopian ambitions of geometric abstraction, radically changed his style, turning again to figurative painting and producing bold, colourful, almost caricature-like everyday life scenes. The store-front was a frequent subject, a potent image in a time of post-war shortages. He contrasted his approach to Surrealists such as Magritte, who ‘shows baguettes proceeding across the sky like a fleet of dirigibles…When I paint bread, I paint baguettes lying on the table. There's mystery there. Mystery that lasts forever.’ Further Reading D. Ottinger, Jean Hélion (2004)