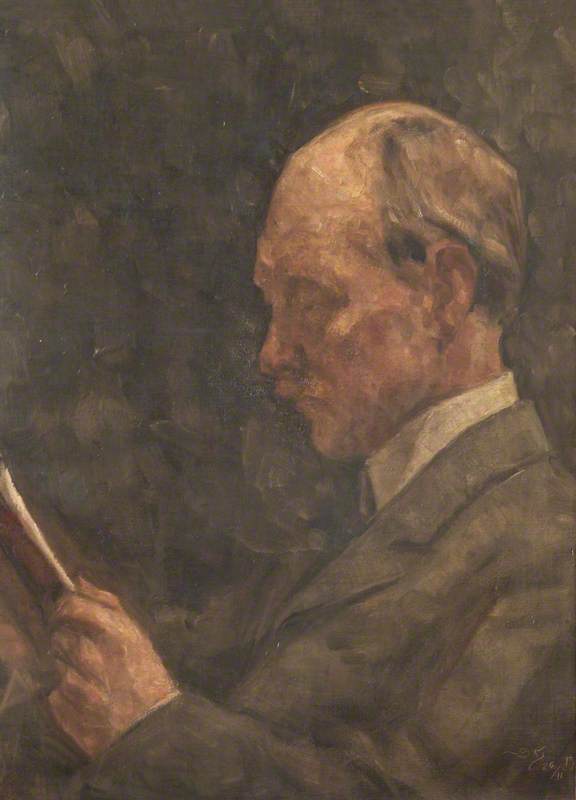 Danish painter, born in Copenhagen, where he lived throughout his life. The son of a merchant, he was trained in drawing from the age of eight and studied at the Royal Danish Academy of Fine Arts. As a young artist, he was influenced by *Whistler. His early work aroused some controversy, initially over its limited colour range and somewhat sketchy handling. The rejection of Bedroom by the Academy jury in 1890 was the catalyst for the creation of a new Independent Exhibition the following year. Hammershøi is best known for his paintings of interiors, generally in a restricted greyish colour range. Where there is a figure, usually female, it is either seen from behind, absorbed in some task, or wrapped in contemplation of something beyond the space of the painting.

Read more
The artist drew inspiration from the paintings of 17th-century Holland, especially a group of works then attributed to Peter de Hooch but now believed to be by Peter Janssens Elinga. Like the Dutch painter, he was preoccupied with near empty spaces and the effects of light from a window. The setting was Hammershøi's own apartment. He made particular play with open and closed doors to suggest a space beyond what the spectator can see directly. It is the elusiveness and sense of the mysterious which links Hammershøi to the international *Symbolist aesthetic. He also painted landscapes and the exteriors of buildings. These are bereft of any human presence, even in his depiction of what was in reality the busy thoroughfare running by Gentoffte Lake. The painter was as reserved in his life as in his art. When he died he was internationally famous, but after his death his work was largely forgotten until a revival of interest began in the 1980s. His brother Svend Hammershøi (1873–1948) was a painter and also a ceramicist. Further Reading F. Krämer et al., Hammershøi (2008)