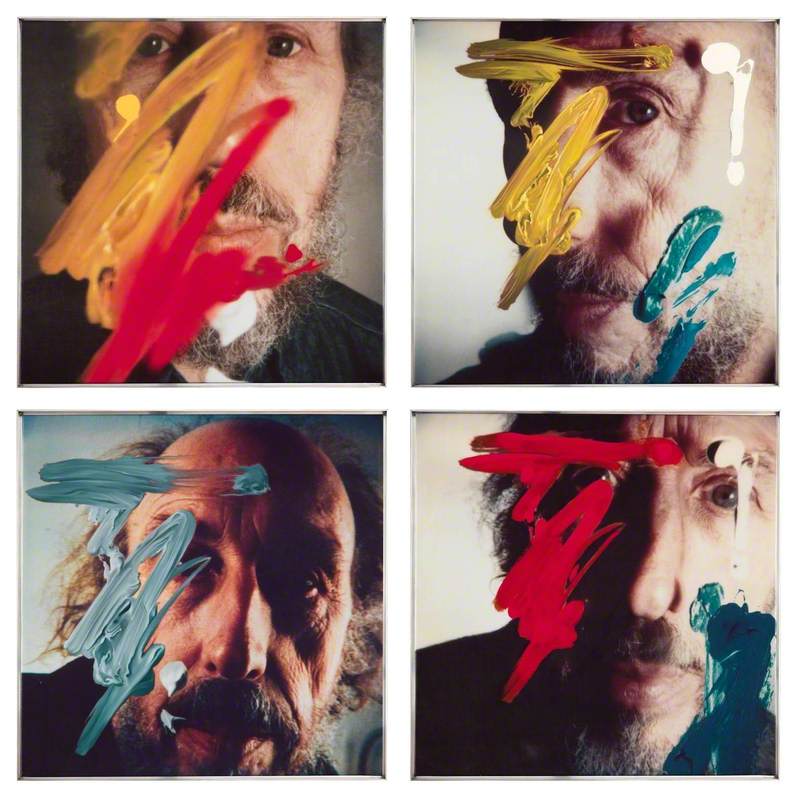 (b London, 24 Feb. 1922; d Northend, Oxfordshire, 13 Sept. 2011). British painter, printmaker, teacher, exhibition organizer, and writer, one of the leading pioneers of Pop art. As a young man he worked in advertising and commercial art and he is best known for his montages featuring scenes from the fields of advertisement and contemporary life, notably Just what is it that makes today's homes so different, so appealing? (1956, Kunsthalle, Tübingen). This photomontage is sometimes considered to be the first Pop art work. Hamilton had a distinguished career as a teacher, notably at King's College, Newcastle upon Tyne (which later became Newcastle University), 1953–66, and organized several exhibitions, including ‘The Almost Complete Works of Marcel Duchamp’ at the Tate Gallery, London, in 1966.

Painter, collagist and printmaker, born in London, who left school at fourteen, working as a jig and tool draughtsman, 1940-1945. He then worked in advertising, attending evening classes at St. Martin's School of Art and Westminster School of Art. During this period Hamilton also worked in the Window Dressing department of the influential Reimann School in London's Pimlico and furthered his studies at the RA Schools, 1938-1940, leaving to do war service as an engineering draughtsman. Returned to RA Schools in 1946 and was expelled, but continued his studies at Slade School 1948-51.In 1952 he became a teacher of silver work, typography and industrial design at the Central School of Arts & Crafts and was also a visiting lecturer at Bath Academy of Art. One of his colleagues there was Eduardo Paolozzi, with whom Hamilton was a founder member of the Independent Group at the ICA and went on to become an influential figure in the Pop Art movement. This was a group of artists and intellectuals who met to discuss cultural change in the age of technology.

In 1953 he became a lecturer in the Fine Art Department at the King's College in the University of Durham and from 1957 to 1961 he taught interior design at the Royal College of Art. In 1960 he was awarded the William and Norma Copley Foundation Prize for Painting. Hamilton has held solo exhibitions and been seen in group shows in the worlds major artistic venues. One of his recent one-person shows 'Imaging James Joyce's Ulysses' was organised by the British Council in 2001. He has reconstructed Marcel Duchamp's Large Glass and, on occasion, collaborated with Dieter Roth. He published Collected Works 1953-1982 and in 1983 collaborated with Rita Donagh, his wife, on an exhibition based on the Maze Prison at the Orchard Gallery, Londonderry. A retrospective exhibition was held at the Tate Gallery in 1970 which travelled to Eindhoven and Bern, the Guggenheim Museum, New York.

Further showing venues include Irish Museum of Modern Art, Dublin, John Morers, Liverpool and elsewhere. He was Britain's representative at the 1993 Venice Biennale. A great printmaker, examples of this discipline are in the collection of the Fitzwilliam Museum, while a cross section of all his work is housed in the Tate Gallery, the University of Warwick Art Collection, Whitworth Art Gallery, Manchester, Hatton Gallery, Newcastle upon Tyne, New Art Gallery Walsall, Pallant House Gallery, Chichester and in Wolverhampton Art Gallery.