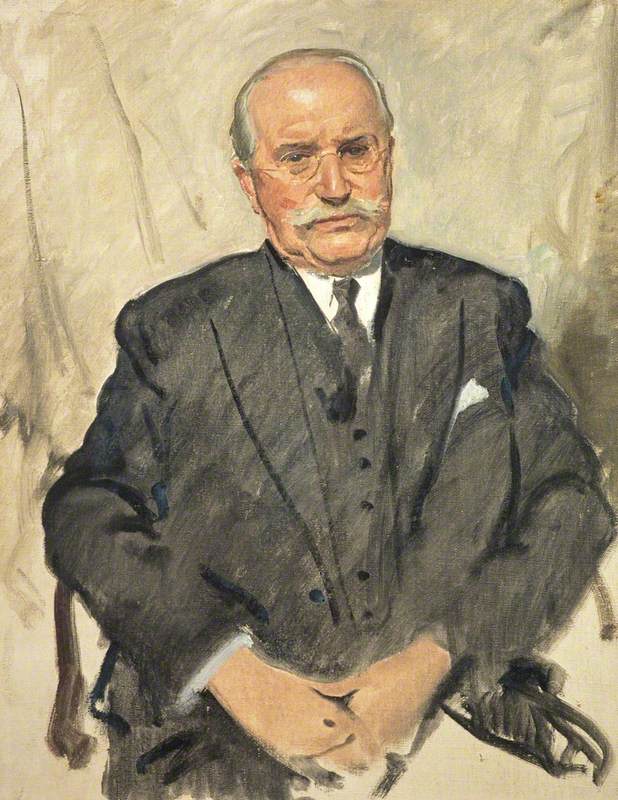 © estate of the artist. Photo credit: National Galleries of Scotland

National Galleries of Scotland
(b Glasgow, 30 June 1893; d London, 30 Dec. 1964). British portrait painter. Gunn enjoyed a successful career with portraits of eminent soldiers, academics, judges, and so on, painted in a solid, forthright style. He was a more interesting painter in less traditional work, notably his portrait of the blind composer Delius (City AG, Bradford), which was the public's choice as ‘picture of the year’ at the Royal Academy in 1933. Also well known is Gunn's Conversation Piece at the Royal Lodge, Windsor, 1950 (NPG, London), showing George VI, Queen Elizabeth (the Queen Mother), and Princesses Elizabeth (later Elizabeth II) and Margaret.

Oxford Dictionary of National Biography
Painter, born in Glasgow, Scotland who studied at Glasgow School of Art, Edinburgh College of Art and at the Académie Julian in Paris under J.P. Laurens. His life as a painter was interrupted by World War I, in which he lost two brothers, and he enlisted with the Artists' Rifles in 1915 being commissioned into the 10th (Scottish) Rifles in 1917. James Gunn as he was known exhibited at RA, RSA, Paris Salon and elsewhere. Elected an Associate of the RA, 1953, and RA, 1961, RSW, 1930 and was also President of the Society of Portrait Painters. He painted the State Portrait of HM Queen Elizabeth II in her 1953 coronation robes and was knighted in 1963. The SNPG held a retrospective exhibition in 1994.