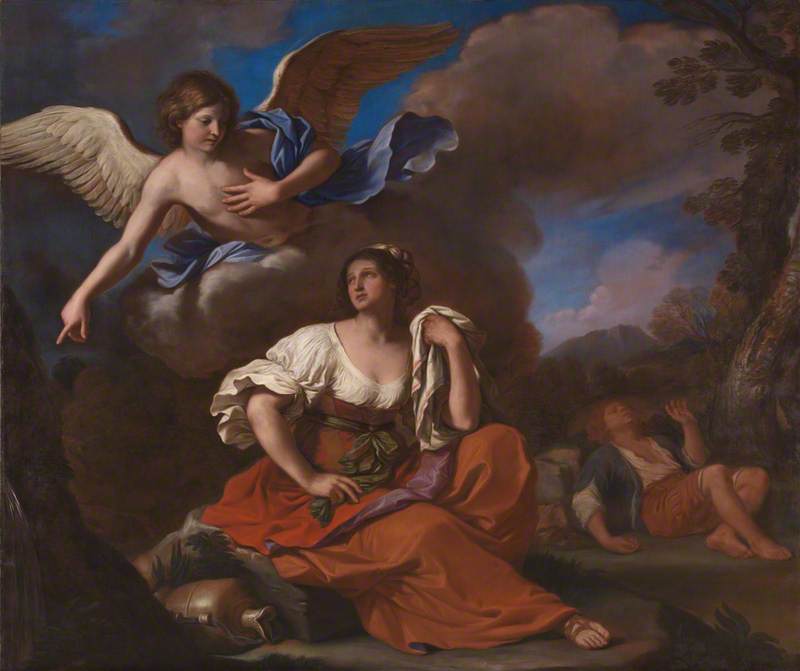 The Angel appears to Hagar and Ishmael 1652-3

(bapt. Cento, nr. Bologna, 8 Feb. [b ?2 Feb.] 1591; d Bologna, 22 Dec. 1666). One of the outstanding Italian painters and draughtsmen of the 17th century; his nickname Guercino (‘Squinter’) was given to him because of an eye defect that is said to have been caused by a childhood accident. He seems to have been mainly self-taught, and his early work drew on a variety of north Italian sources, notably Ludovico Carracci and Venetian painting, to create a highly individual style characterized by dramatic and capricious lighting, strong colour, and broad, vigorous brushwork. In 1621 one of his patrons, Cardinal Alessandro Ludovisi, became Pope Gregory XV and summoned him to Rome. Among other commissions there he painted the celebrated ceiling fresco of Aurora (1621) in the Casino of the Villa Ludovisi for Gregory's nephew, Cardinal Ludovico Ludovisi.

Read more
This exuberant work, with its illusionistic architectural framework designed by Agostino Tassi, is much more Baroque in style than Guido Reni's treatment of the subject of a decade earlier. On the death of the pope in 1623 Guercino returned to Cento, but his short stay in Rome introduced a more classical feeling to his work. This trend became more pronounced after he moved to Bologna in 1642 to take over the mantle of Reni, who died in that year. For the next quarter of a century, until his own death, he was Bologna's leading painter, and his late works can be remarkably similar to Reni's—calm and light in colouring, with little of the lively movement of his early style (St Luke Displaying a Painting of the Virgin, 1652, Nelson–Atkins Mus., Kansas City, Missouri). His career is especially well documented because of Malvasia's scrupulous biography and the survival of a studio account book covering the period from 1629 until his death.As well as being a major painter, Guercino was one of the most brilliant draughtsmen of his age. In addition to preparatory studies for his paintings, he made many informal drawings for his own pleasure (including landscapes, genre scenes, and caricatures) and these—usually executed in pen and brown ink—often show remarkable freedom and vitality. The finest collection of his drawings is in the Royal Library at Windsor Castle. His reputation remained high until the mid-19th century, when it crumbled along with those of the other great Bolognese painters, under the attacks of Ruskin. His rehabilitation in the mid-20th century owed much to the championship of Denis Mahon.