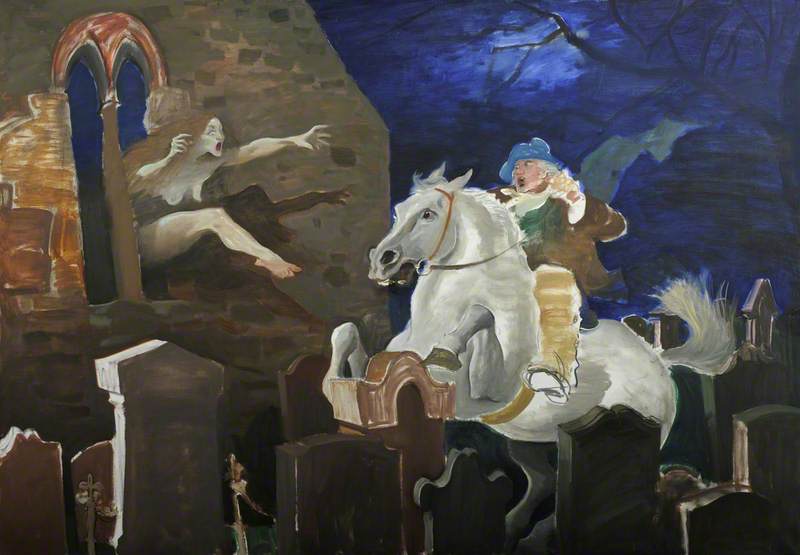 'Scarcely Had He Maggie Rallied' 1996

Painter, notably of portraits, born in Paisley, Renfrewshire, father of the artist Lachlan Goudie. He studied at Glasgow School of Art, 1950–5, under William Armour, Benno Schotz and David Donaldson. He was awarded the Somerville Shanks Prize for Composition, Newbery Medal, postgraduate scholarship, Keith Award (RSA), and in 1953 a travelling scholarship enabled him to visit Paris. From the late 1950s Goudie, who married a French wife, frequently visited France, including annual painting trips to Loctudy, Brittany. His first major exhibition of Breton pictures was at The Scottish Gallery, Edinburgh, in 1966. There was a retrospective at The Fine Art Society, Glasgow, 1983, and a solo show at Roger Billcliffe Fine Art, Glasgow, 1992. In 1987–9 Goudie carried out décor for the Brittany Ferries flagship Bretagne.

Read more
Goudie’s stylish portraits included HM The Queen, Billy Connolly the comedian and Lord Mackay when Lord Chancellor. Robert Fleming Holdings Ltd has his work. Goudie was a member of Glasgow Art Club, RP and Royal Glasgow Institute of the Fine Arts. Breton works were shown at The John Davies Gallery, Stow-on-the-Wold, 2002. The Goudie Collection at Rozelle House in Alloway holds a large series of paintings based on Robert Burns’ poem Tam O’Shanter, which had haunted the artist since childhood. Memorial exhibition in 2006 at The Scottish Gallery, Edinburgh. He died in Glasgow.