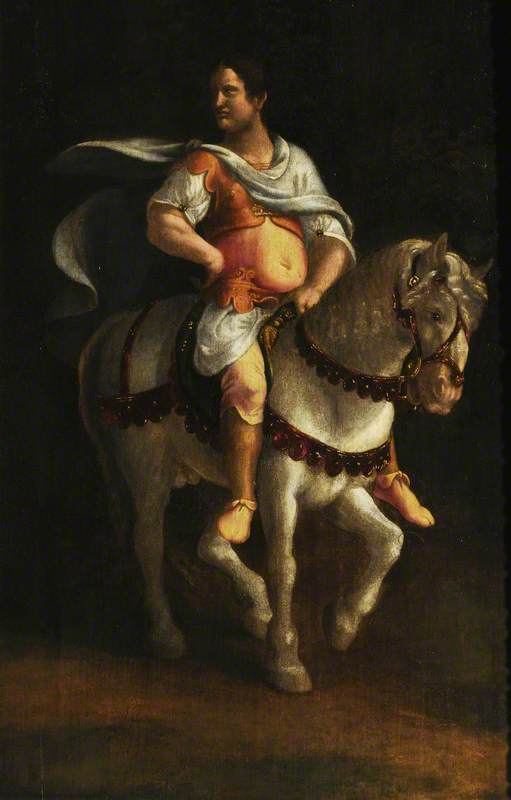 A Roman Emperor on Horseback

(b Rome, ?1499; d Mantua, 1 Nov. 1546). Italian painter, architect, and designer. He was the only major Renaissance artist who was a native of Rome, but he worked mainly in Mantua. In his youth he was Raphael's chief pupil and assistant (although exactly what part he played in his workshop is uncertain) and later one of the outstanding figures of Mannerist art and architecture. It is not known when Giulio began working for Raphael, but it was probably in about 1515, when he was still very young; after the master's death in 1520 he became his main artistic executor, completing a number of his unfinished works, including the decorations of the Villa Madama. His independent works of this time include the Holy Family (c.1522) in S. Maria dell'Anima, Rome, and the design of some pornographic prints that caused such a scandal that their engraver Marcantonio Raimondi was imprisoned (their notoriety was sustained by the sonnets that the poet Pietro Aretino wrote inspired by them soon after their publication).

Read more
Giulio had moved to Mantua in 1524 and escaped Raimondi's fate. He remained there for the rest of his life and dominated the artistic affairs of the Gonzaga court. The great monument to his genius is the Palazzo del Tè, begun in 1526 for Federico Gonzaga. This was one of the first Mannerist buildings, deliberately flouting the canons of classical architecture as exemplified by Bramante in order to shock or surprise the spectator. The same tendency is continued in Giulio's fresco decoration in the palace, especially in the Sala dei Giganti, where the whole room is painted from floor to ceiling to give an overall illusionistic effect, and the spectator feels overwhelmed by the rocks and thunderbolts hurled down on the rebellious Titans who attempted to storm Olympus. Giulio painted several other frescos in the Palazzo del Tè and in the Sala di Troia of the Ducal Palace at Mantua that testify to his classical learning and exuberant invention. His muscular style owed much to Michelangelo as well as to Raphael, but was less daunting than that of either and proved widely influential. Indeed, he became one of the most famous painters of his day and has the distinction of being the only modern artist mentioned by Shakespeare: he called him ‘that rare Italian master Julio Romano’, but mistakenly imagined him a sculptor (The Winter's Tale, v. ii).