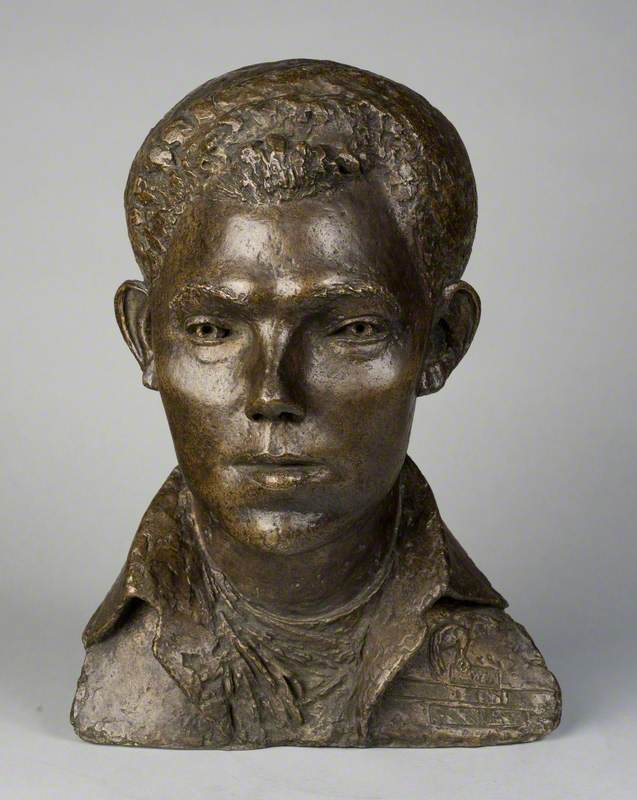 Sculptor, ceramist and teacher. His first wife was the artist Kaff Gerrard, with whom he had a show at Colnaghi’s, 1931. Gerrard studied at Manchester School of Art, then Slade School of Fine Art. He served in the Army and Royal Flying Corps in World War I, in the Army in World War II and was a war artist, 1944–5. He joined the Slade’s staff in 1925, was its temporary head in 1948–9, and was professor of sculpture there, 1948–68, thereafter professor emeritus. Won the RBS Silver Medal in 1960. Gerrard’s stone relief The North Wind is on London Transport headquarters. His work was included in The Slade 1871–1971 exhibition at RA in 1971. Lived at Leyswood, Tunbridge Wells, Kent. Gerrard, known as Gerry, was a revered teacher of students as diverse as Karin Jonzen, Eduardo Paolozzi and F E McWilliam, who wrote a catalogue tribute for the Gerrard retrospective at South London Art Gallery in 1978.

Read more
Henry Moore Institute, Leeds, posthumously acquired Gerrard’s work, including it in the exhibition Sculpture in twentieth-century Britain, 2003. David Buckman’s biography of Gerrard, completed in 2001, tells the story of the Slade sculpture school and details his career and principal works.

Oxford Dictionary of National Biography
Sculptor and teacher who during World War I saw service with the Cameron Highlanders, Black Watch, the Gordon Highlanders and the Royal Flying Corps. In 1919 he studied at Manchester School of Art, and at the Slade School of Art under Professor Tonks in 1920.

He was appointed Head of the Department of Sculpture at the Slade in 1925 and in 1926 he was commissioned to execute the sculpture 'Memorial to a Hunter'. This was the first work of sculpture to be exhibited in the gardens of the Tate Gallery.

In 1927 he was commissioned by the Aeolian Hall to illustrate with woodcuts, the 'Life of Beethoven'.

He prepared for this commission by travelling throughout Germany visiting sites where Beethoven lived and worked. In 1928 he was commissioned, together with Henry Moore and Jacob Epstein, to carry out carved sculpture on the exterior of St. James' Underground Station.

Further commissions include bronze busts of Dr Herbert Spencer and Evelyn Leigh-Pemberton, the Duchy of Cornwall's Estate for a sculpture of St. Anselm for the entrance, and capitals for the interior of the new St. Anselm's Church, Kennington Cross, a sculpture for Horticultural Hall, Westminster. He also worked on for interior murals for ocean-going liners, for Selfridges and many others.

He was an Official War Artist in World War II returning to his post at the Slade School in 1946 and was appointed Professor of Sculpture in 1949 a position he held until his retirement in 1968. A Retrospective exhibition was held at South London Art Gallery, 1978 and Gerry as he was affectionately known retired to his home in Kent where he painted and drew into old age. He collaborated with his first wife, Katherine Leigh-Pemberton, (Kaff Gerrard) on the illustrations for several books. There are portrait busts by him in the collection of the IWM.

Gerrard rarely exhibited showing only occasionally at the NEAC, he was also elected a fellow of the RBS.