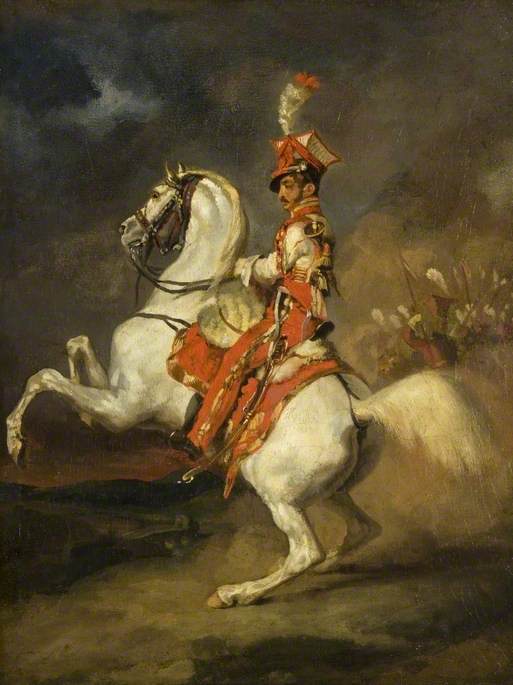 (b Rouen, 26 Sept. 1791; d Paris, 26 Jan. 1824). French painter, lithographer, draughtsman, and occasional sculptor, one of the prime movers and most original figures of Romanticism. He studied in Paris with Carle Vernet and Pierre Guérin, but learned more by making copies of the Old Masters in the Louvre, developing in particular a passion for Rubens. In 1812 he won a gold medal with his first submission to the Salon—Charging Chasseur (Louvre, Paris), a dashing battle scene celebrating French military prowess at a time when Napoleon was at the peak of his power. He was unsuccessful in his attempt to win the Prix de Rome, but he visited Italy of his own accord in 1816–17 (he came from a wealthy family and could travel and study at his leisure).

Read more
After his return to Paris he began work on his masterpiece, the Raft of the Medusa (Louvre), which created a sensation at the 1819 Salon: although it was admired by some critics and was awarded a medal, it was regarded as outrageous by many viewers, partly because of its realistic depiction of a horrific event and partly because of its political implications (it shows the ordeal of the survivors of the shipwreck of the Medusa in 1816, a disaster ascribed by some to government incompetence). The huge picture, which was remarkably original in treating a contemporary event with epic grandeur, also attracted great attention in England, where Géricault spent 18 months in 1820–1 (more than 50,000 visitors paid to see it when it was exhibited in London and its reception was generally favourable). During his stay in England he made drawings, watercolours, and lithographs of various subjects, including scenes of urban poverty, and also produced one major oil painting, Derby at Epsom (1821, Louvre). He was one of the first to bring English painting to the attention of French artists and was particularly enthusiastic about Bonington and Constable.By the time he returned to Paris at the end of 1821 Géricault was seriously ill with tuberculosis. However, this did not quench his almost obsessive passion for horses, and his death at the age of 32 was hastened by riding accidents. Other aspects of his archetypally Romantic temperament were his dandyism and his scandalous love life (one of his affairs was with the young wife of his uncle). His tempestuous career lasted little more than a decade and in that time he displayed a meteoric and many-sided genius (his teacher Guérin said that he had ‘the stuff of several painters’ in him). His love of stirring action, his energetic handling of paint, and his taste for the violent and the macabre were all to become features of Romanticism. In certain respects he was even more forward-looking, anticipating the Realism of Courbet: he made studies from corpses and severed limbs for the Raft of the Medusa and painted an extraordinary series of portraits of mental patients in the clinic of his friend Dr Georget, one of the pioneers of humane treatment for the insane (A Kleptomaniac, c.1822–3, Mus. B.-A., Ghent). His work had enormous influence, most notably on his friend Delacroix.