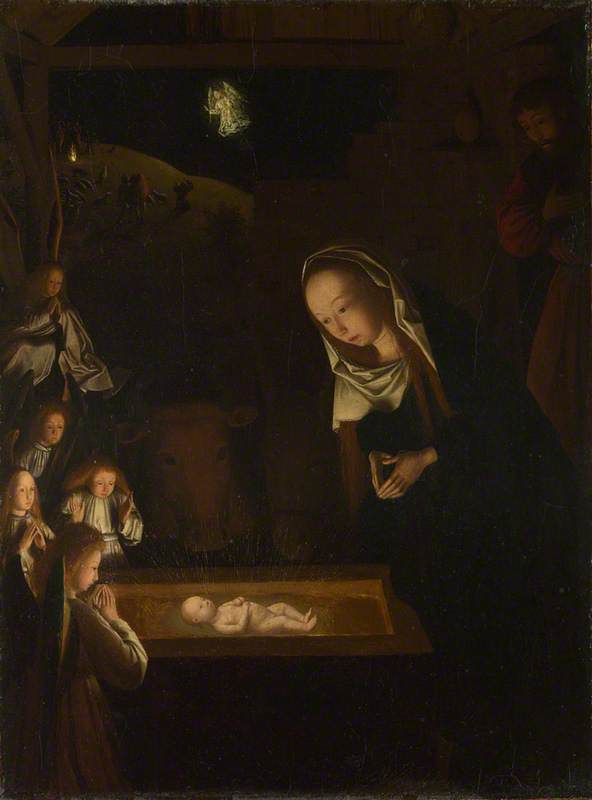 The Nativity at Night possibly about 1490

(b ?Leiden, ?c.1460; d ?Haarlem, ?c.1490). Netherlandish painter, active in Haarlem, where he was the outstanding artist of his day. Almost nothing is known of his career, but van Mander says that he was a pupil of Ouwater and that he died when he was about 28. His name means ‘Little Gerard of the Brethren of St John’, after the Order in Haarlem of which he was a lay brother. For the monastery church of the Brethren he painted his only documented work, a triptych of the Crucifixion, of which two large panels (originally two sides of a wing) survive (KH Mus., Vienna): the Lamentation of Christ and the Burning of the Bones of St John the Baptist. Certain features of these paintings—particularly the slender, doll-like figures with smooth, rather egg-like heads—are highly distinctive, and a small oeuvre of about fifteen paintings has been attributed to Geertgen on stylistic grounds.

Read more
Unlike the Vienna panels, most of the other pictures given to him are fairly small. They include such remarkably beautiful works as the Nativity (NG, London), a radiant nocturnal scene, and St John the Baptist in the Wilderness (Gemäldegalerie, Berlin), which shows an exquisite feeling for nature. The vein of tender melancholy that pervades Geertgen's work, the beguilingly innocent charm of his figures, and his sensitivity to light are perhaps the salient qualities that make him one of the most irresistibly attractive artists of the Early Netherlandish School.