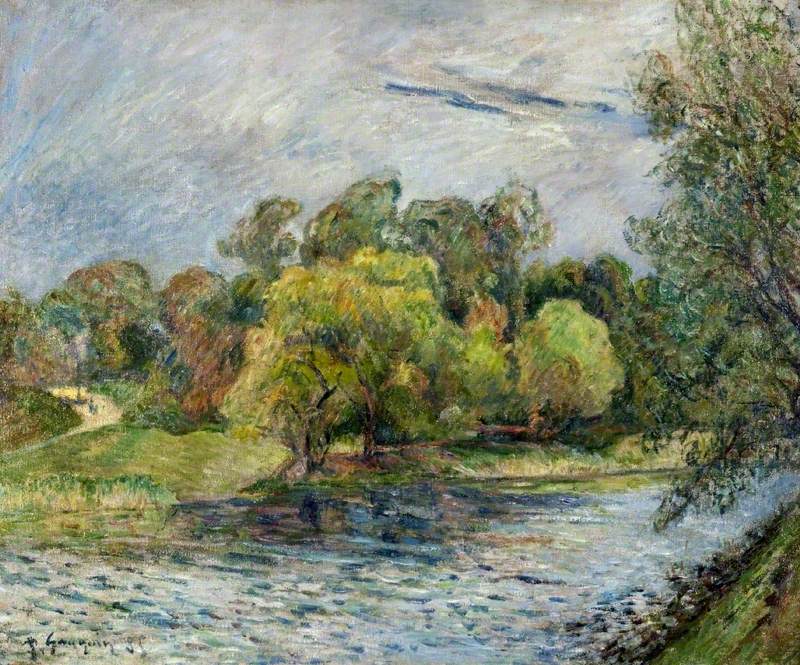 (Born Paris, 7 June 1848; died Atuona, Marquesas Islands, 8 May 1903). French painter, printmaker, sculptor and ceramicist, with Cézanne and van Gogh the greatest of the Post-Impressionists and like them a seminal figure in the development of modern art. His father was a radical journalist and his mother, who was half French and half Peruvian Creole, also had strong political convictions. They were opponents of the regime of Louis Napoleon (later Napoleon III) and in 1851 the family left France for exile in Peru. Gauguin spent part of his childhood in Lima before returning to France with his mother in 1855 (his father had died on the outward journey). He joined the merchant marine in 1865, transferred to the French navy in 1868, and from 1872 worked successfully as a stockbroker.

Read more
In the early 1870s he became a keen amateur painter and in 1874 he saw the first Impressionist exhibition. At about the same time he met Pissarro, who encouraged him, and began to make a collection of Impressionist pictures. He had a landscape accepted by the Salon in 1876 and his work was shown in the fifth to eighth (and last) Impressionist exhibitions (1880–6). In 1883 he gave up his employment to become a full-time artist, but had little success and sold his collection to support himself and his family. After the last Impressionist exhibition he moved to Brittany, abandoning his family, and until 1890 he spent much of his time at Pont-Aven, where he became the pivot of a group of artists who were attracted by his powerful personality and stimulating ideas about art. The most important work he produced there was The Vision after the Sermon, also known as Jacob Wrestling with the Angel (1888, NG, Edinburgh), in which he broke away completely from the Impressionist style, using areas of pure, flat colour for expressive and symbolic purposes. In 1887–8 he visited Panama and Martinique, and in 1888 he spent a short time at Arles with van Gogh, a visit that ended in a disastrous quarrel as van Gogh suffered one of his first attacks of madness.

Gauguin had a taste for colourful, exotic places since his childhood in Peru and in 1891 he left France for Tahiti. In the account he wrote of his life there, Noa Noa (1st pub. 1897), he said: ‘I have escaped everything that is artificial and conventional. Here I enter into Truth, become one with nature. After the disease of civilization, life in this new world is a return to health.’ His theory and practice of art reflected these attitudes. He was one of the first to find visual inspiration in the arts of ancient or primitive peoples (see primitivism), and he reacted vigorously against the naturalism of the Impressionists and the scientific preoccupations of the Neo-Impressionists. As well as using colour unnaturalistically for its decorative or emotional effect, he employed emphatic outlines forming rhythmic patterns suggestive of stained glass or Japanese colour prints (see Ukiyo-e). Gauguin also produced woodcuts in which the black and white areas formed almost abstract patterns and the tool marks were incorporated as parts of the design. Along with those of Edvard Munch, these prints played an important part in stimulating the major revival of the art of woodcut in the early 20th century. Gauguin's other work included woodcarving and pottery.

In Tahiti he endeavoured to ‘go native’ and despite the constant pressure of poverty he painted his finest pictures there. His colours became more resonant, his drawing more grandly simplified, and his expression of the mysteries of life more profound. In 1893 poverty and ill health forced him to return to France, but he had a financial windfall when an uncle died and he was back in Tahiti in 1895. At the end of 1897 he painted his largest and most famous picture, the allegory of life Where Do We Come From? Who Are We? Where Are We Going? (MFA, Boston), before attempting suicide (although he had deserted his family he had been devastated that year by the news of the death of his favourite daughter). In September 1901 he settled at Dominica in the Marquesas Islands, where he died two years later. Until his death he worked continuously in the face of poverty, illness (he had syphilis), and lack of recognition. During his time in the South Seas he was often unable to obtain proper materials and was forced to spread his colours thinly on coarse sacking, but from these limitations he forged a style of rough vigour wholly appropriate to the boldness of his vision.

Gauguin was by no means forgotten in France during his years in the South Seas, but at the time of his death few would have agreed with his self-assessment: ‘I am a great artist and I know it. It is because I am that I have endured such suffering.’ His reputation was firmly established, however, when 227 of his works were shown at the Salon d'Automne in Paris in 1906, and his influence has been enormous. The Nabis were formed under his inspiration, he was a leading figure of the Symbolist movement and one of the sources for Fauvism. Later, he was one of the major influences on the general non-naturalistic trend of 20th-century art. Because of the romantic appeal of his life and personality, particularly his willingness to sacrifice everything for his art, Gauguin (like his friend van Gogh) has also been an inspiration for popular and fictional biography, including the novel The Moon and Sixpence (1919) by Somerset Maugham, and the opera (1957) of the same title by John L. Gardner.