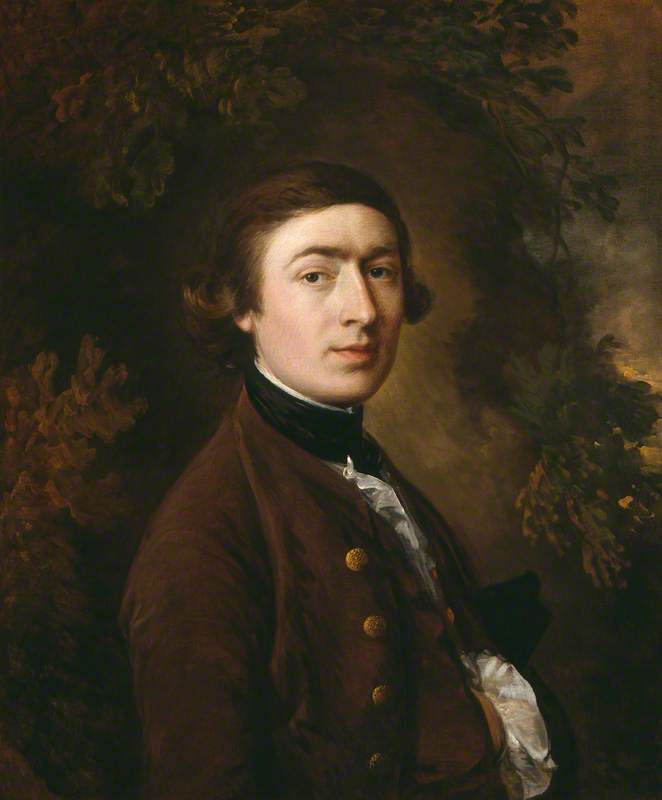 (Baptised Sudbury, Suffolk, 14 May 1727; died London, 2 August 1788). English painter (of portraits, landscapes, and fancy pictures), draughtsman and occasional printmaker, one of the most individual geniuses in British art. He showed artistic talent from an early age and around 1740 (aged about 13) he moved to London, where he studied with Gravelot and perhaps also with Hayman. In 1748 he returned to Sudbury and in 1752 he set up as a portrait painter in Ipswich, the largest town in the county. His work at this time consisted mainly of heads and half-lengths, but he also produced some small portrait groups in landscape settings, including the celebrated Mr and Mrs Andrews (c.1749, NG, London), remarkable for its ‘dewy freshness’ (Ellis Waterhouse). In addition he painted pure landscapes (Cornard Wood, 1748, NG, London). His patrons in Ipswich were mainly the merchants of the town and local squires, but in 1759 he moved to Bath, where he worked for much more fashionable clients, many of them wealthy visitors to the spa town. From now on all his portraits were life-size and many of them were full-lengths, in which he cultivated a free and elegant manner (Mary, Countess Howe, c.1764, Kenwood House, London).

Read more
In 1768 he was one of the foundation members of the Royal Academy (the only portraitist from outside London to be so honoured), and in 1774 he settled permanently in the capital. Here he further developed the personal style he had evolved at Bath, working with light and rapid brushstrokes and delicate and evanescent colours. He became a favourite painter of the royal family, even though his rival Reynolds was appointed principal painter to the king (succeeding Allan Ramsay) in 1784. Gainsborough said that while portraiture was his profession, landscape painting was his pleasure, and he continued to paint landscapes long after he had left a country neighbourhood, sometimes basing them on materials such as twigs and pebbles, which he arranged in the studio as a stimulus to his imagination. He also produced many landscape drawings, some in pencil, some in charcoal and chalk (he liked to experiment technically, for example by combining normally separate media such as chalk and oils; he also made some prints using the new techniques of aquatint and soft-ground etching). In his later years he extended his range to include fancy pictures of pastoral subjects (Peasant Girl Gathering Sticks, 1782, Manchester AG). He is only once known to have left England, making a brief visit to the Netherlands in 1783.

Gainsborough's style had diverse sources. His early works show the influence of French engraving and of Dutch landscape painting; at Bath his change of portrait style owed much to a close study of van Dyck, whose work he saw in nearby country houses (his admiration is most clear in The Blue Boy, c.1770, Huntington Art Coll., San Marino); and in his later landscapes he was sometimes influenced by Rubens (The Watering Place, c.1777, NG, London). But he was an independent and highly original artist, able to assimilate to his own ends what he learnt from others, and he always relied mainly on his own resources. With the exception of his nephew Gainsborough Dupont, he had no assistants and unlike most of his contemporaries he never employed a drapery painter. He was in many ways the antithesis of Reynolds. Whereas Reynolds was sober-minded and the complete professional, Gainsborough (even though his output was prodigious) was much more easy-going and often overdue with his commissions, writing that ‘painting and punctuality mix like oil and vinegar’.

Although he was an entertaining letter-writer, Gainsborough, unlike Reynolds, had no interest in literary or historical themes, his great passion outside painting being music (his friend William Jackson the composer wrote that he ‘avoided the company of literary men, who were his aversion…he detested reading’). The two artists had great mutual respect, however: Gainsborough asked for Reynolds to visit him on his deathbed, and Reynolds was one of the pallbearers at his funeral. Reynolds also paid posthumous tribute to his rival in his Fourteenth Discourse: recognizing the fluid brilliance of his brushwork, he praised ‘his manner of forming all the parts of a picture together’, and wrote of ‘all those odd scratches and marks’ that ‘by a kind of magic, at a certain distance…seem to drop into their proper places’. Examples of Gainsborough's work are in many collections in Britain and the USA, including the museum devoted to him in Sudbury, located in the attractive house in which he was born.