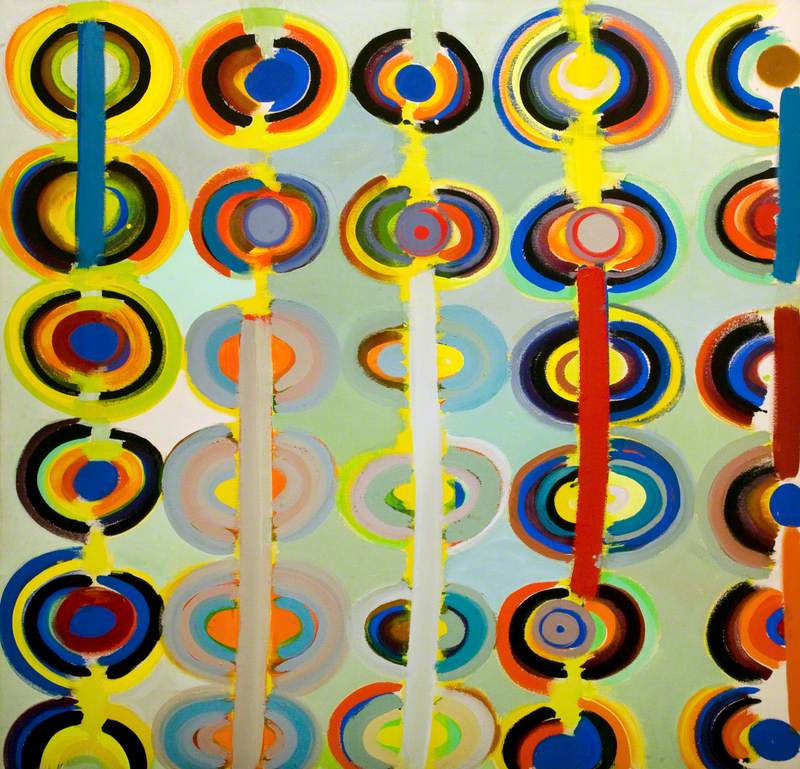 British painter, born in Leamington Spa, Warwickshire, one of the leading artists of the *St Ives School. He attended evening classes in art when he was sixteen, but then worked at various jobs, mainly concerned with electricity and radio, and did not take up painting until 1943, when he was a prisoner of war in Germany. His fellow prisoner Adrian *Heath encouraged him. After the war Frost studied at St Ives School of Art (1946) under its founder Leonard Fuller (1891–1973), then at Camberwell School of Art (1947–50) under *Coldstream and *Pasmore (whom he described as ‘my god’). In 1951 he worked as assistant to Barbara *Hepworth. His early work was in the sober realistic tradition of the *Euston Road School, but he soon turned to abstraction.

Read more
His work remained based on observations of nature, however, often the harbour at St Ives where he spent a great deal of time up until 1963. Blue Movement (1953, Vancouver Art Gallery) is an attempt to render in abstract terms the effect of the rise and fall of boats in a harbour on a twilit evening. Characteristically he used patterns of interlinked shapes—strongly outlined but avoiding geometrical regularity. Frost taught at Bath Academy of Art, 1952–4, Leeds College of Art, 1956–9, and Reading University, 1965–81. He was appointed professor at Reading in 1977 and became emeritus professor on his retirement. He was knighted in 1998. His son Anthony Frost (1951– ) is also an abstract painter of the St Ives School. Further Reading C. Stephens, Terry Frost (2000) ‘Sir Terry Frost’, obituary, The Times (3 September 2003)

Oxford Dictionary of National Biography
Biography on Oxford Art Online
Abstract painter and printmaker born Terence Ernest Manitou Frost in Leamington Spa, Warwickshire. He enlisted in the army in World War II in 1939 and after serving in Sudan, Abyssinia, Egypt and Crete he was taken prisoner-of-war in June 1941. In the POW camp at Hohenfais, Bavaria, he met Adrian Heath who encouraged him to paint. After the cessation of hostilities in 1945 he began attending evening classes at Birmingham School of Art and the following year he relocated to Cornwall where he attended St. Ives School of Painting. In 1947 Frost held his first solo exhibition at G.R. Downing's bookshop in St. Ives, and that autumn began studying at Camberwell School of Arts & Crafts. He did not paint his first abstract picture until 1949 and from then on his work became totally abstract and during the next decade was associated with the short-lived Constructionism movement.

He settled permanently in St. Ives in 1951 and for a time was a studio assistant to sculptor Barbara Hepworth. He was appointed Gregory Fellow at Leeds University, 1954-56. Frost taught variously at Leeds School of Art, Bath Academy, Corsham, Coventry Art College and Reading University and received a Knighthood in 1998. In a long and extensively fruitful career he showed at every major art societies in his adopted Cornwall including the STISA and the NSA. He also exhibited across the UK and indeed on a world-wide basis. Latterly many of his works were reproduced as limited edition prints and sold through outlets like CCA Galleries and the Curwen Gallery. Frost's estate is handled by and exhibited at Beaux Arts Bath and Beaux Arts London and has also been exhibited at Belgrave Gallery, Austin Desmond Fine Art and at KHG.