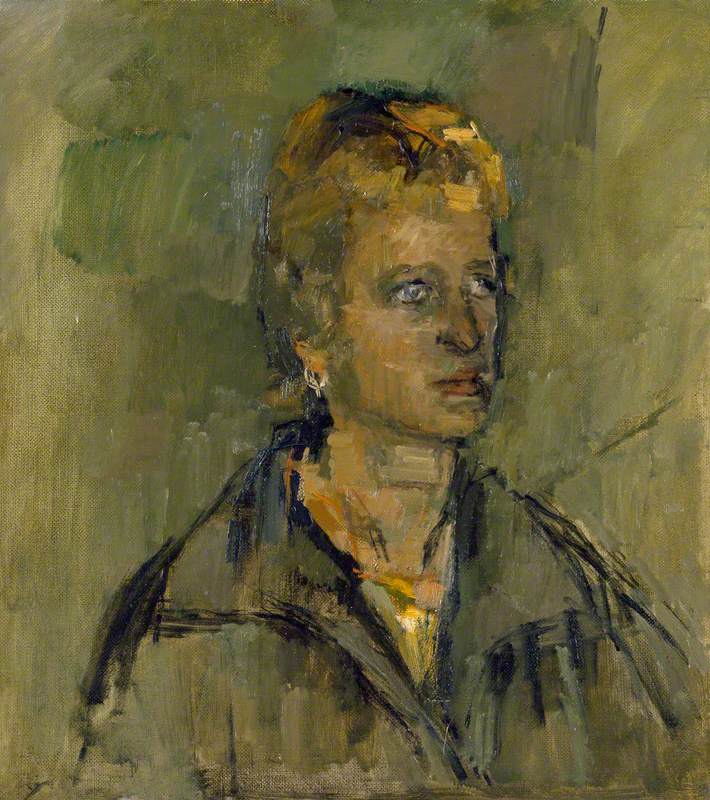 Royal Academy of Arts
(b Thurlow, Suffolk, 14 Nov. 1930; d Wolland, nr. Blandford Forum, Dorset, 18 Apr. 1993). British sculptor and graphic artist. Some of her early work—influenced by Giacometti—was angular and menacing. During the 1960s her figures—typically horses and riders or male nudes—became smoother, but she retained a feeling of the bizarre in the polished goggles that feature particularly in her over-life-size heads. She worked mainly in bronze and had numerous public commissions, for example Horse and Rider (1975) in Piccadilly, London, made for Trafalgar House Investments Ltd. Later in her career she also did numerous portrait busts of distinguished sitters. In addition to sculpture she made prints and drawings.

Oxford Dictionary of National Biography
Biography on Oxford Art Online
Sculptor and printmaker born at Thurlow, Suffolk. She studied at Guildford School of Art and Chelsea School of Art and first captured the public's attention in 1951 at an exhibition at the Beaux Arts Gallery, London. Since then exhibited regularly and was for twenty-seven years associated with the Waddington Gallery in London and Toronto, Canada. Her main subjects were man, dog and horse. The appeal of her work lies in its directness, the expurgation of all artiness in a frank statement of feeling. Often the anatomy is exaggerated or incorrect, the life-likeness grows more out of her interest in the spirit of the subject: the urgency animating Running Man, the alertness in Barking Dog. During the Algerian war, she began making heads, blinded by goggles and which have a threatening facelessness.

Her numerous public commissions include Wild Boar for Harlow New Town, Blind Beggar and Dog for Bethnal Green, a lectern for Coventry Cathedral, Shepherd for Paternoster Square beside St. Paul's Cathedral and a Walking Madonna for Salisbury Cathedral. In 1982, she was for her services to art created DBE. A 1985 retrospective was given to her at the RA of which she was an elected member. As an exhibitor she showed at all major UK venues including the RSA, SSWA, WIAC, RGI, Grosvenor Gallery, Compass Gallery, Glasgow, Marjorie Parr Gallery and at the New Grafton Gallery, Barnes and at venues around the world. Her work is represented in the Tate Gallery, Abbot Hall Art Gallery, Jerwood Sculpture Park, Lancaster University Art Gallery, Liverpool University Art Collection, New Hall College, Cambridge, University of Warwick Art Collection, Yorkshire Sculpture Park and in public collections world-wide. Many of her drawings from the 1960's appeared as prints executed by the Curwen Press. Elisabeth Frink was diagnosed with cancer in her early sixties. Despite this, she was working on a colossal statue, 'Risen Christ', for Liverpool Cathedral. This sculpture would prove to be her last as, just one week after its installation she died aged 62. Frink was the mother of the painter Lin Jammet and her estate is handled by and exhibited at Beaux Arts Bath and Beaux Arts London. Her estate at her death was valued at £4.6 million the equivalent in 2014 of £8.4 million.

We are grateful to artbiogs.co.uk for assistance