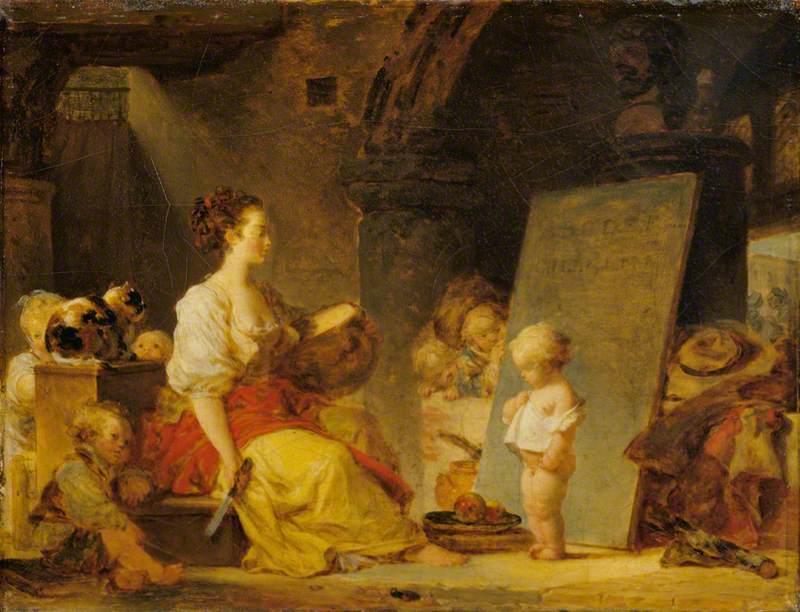 (b Grasse, 5 Apr. 1732; d Paris, 22 Aug. 1806). French painter whose scenes of frivolity and gallantry are among the most complete embodiments of the Rococo spirit: he has been described as the ‘fragrant essence’ of the 18th century. After a brief period studying with Chardin, to whom he was temperamentally unsuited, Fragonard became Boucher's most brilliant pupil and in 1752 won the Prix de Rome, even though he was not officially qualified to enter the competition as he was not a student at the Académie Royale (Boucher said ‘It does not matter: you are my pupil’). From 1756 to 1761 he lived in Rome, where he eschewed the work of the approved masters of the High Renaissance and instead found inspiration in a freer and more colourful tradition, represented above all by Tiepolo.

Read more
His best friend in Rome was Hubert Robert, with whom he spent several weeks at the Villa d'Este, Tivoli, in the summer of 1760; he made some beautiful drawings of the villa's gardens, memories of which occur in paintings throughout his career (he saw the villa again on a second visit to Italy in 1773–4). In 1765 Fragonard became a member of the Académie with Coroesus Sacrificing Himself to Save Callirhoe (Louvre, Paris), a huge, luridly melodramatic scene illustrating an obscure Greek myth. Although the picture won lavish praise, he soon abandoned this idiom for the erotic canvases by which he is chiefly known. His delicate colouring, witty characterization, and spontaneous brushwork ensured that even his most intimate or voyeuristic subjects are never vulgar, and his finest works have an irresistible verve and joyfulness (The Swing, 1767, Wallace Coll., London). After his marriage in 1769 he also painted children and pictures of domestic life, and his large output included various other subjects, including landscapes, portraits, and occasional religious scenes. He stopped exhibiting at the Salon in 1767 and almost all his work was done for private patrons. Among them was Mme du Barry, Louis XV's most beautiful mistress, for whom he painted the works that are often regarded as his masterpieces—the four canvases entitled The Progress of Love (c.1770–3, Frick Coll., New York; he later added other pictures to the series). Mme du Barry, however, returned the pictures and had them replaced with works by Vien—an early indication that taste in court circles was beginning to turn against Fragonard's light-hearted style. He adapted to some extent to the new Neoclassical vogue, notably by using more polished brushwork, but after the French Revolution his scenes of frivolous aristocratic pleasure were completely outmoded and he seems to have given up painting in about 1792. Jacques-Louis David, who as a young unknown had been helped by Fragonard, returned the kindness by finding him an administrative job at the Louvre, which had opened as a national museum in 1793. Fragonard worked there until 1800, then lived the rest of his life in obscurity.There were several other painters in Fragonard's family, including his son, Alexandre-Évariste Fragonard (1780–1850), who specialized in historical subjects, and his sister-in-law Marguerite Gérard (1761–1837), who was regarded as one of the finest women artists in France (her work consisted mainly of portraits and genre scenes). Gérard had a close professional relationship with Fragonard, as his pupil, protégée, and colleague (they sometimes collaborated on pictures). According to popular legend they were also lovers, in spite of the almost 30-year age gap between them, but there is no contemporary evidence to support this idea. Berthe Morisot was Fragonard's great-granddaughter.