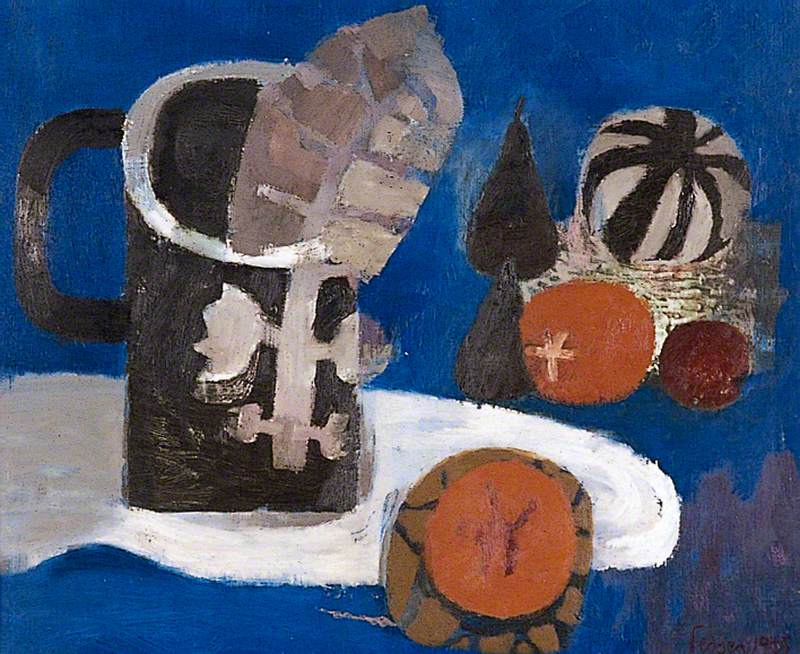 Painter, notably of murals, and teacher, born in Bristol, married to the artist Julian Trevelyan. She studied at Slade School of Fine Art, as a scholar, 1932–6. She taught painting – the first woman tutor – at Royal College of Art, 1958–64, from 1965–70 at Yehudi Menuhin School. Was a member of LG, 1962–4, and participated in many other mixed shows. Solo shows included Redfern Gallery from 1953, Hamet Gallery from 1970, Heal’s Mansard Gallery, Arnolfini Gallery in Bristol and elsewhere in the provinces. Major exhibition at RWA in 1988, by which time she had been its president for several years, with another in 1996. Mural commissions included Festival of Britain in 1951, the P & O liner Canberra in 1961, one with Julian Trevelyan at Charing Cross Hospital in 1980, and one for Colindale Hospital, 1985.

Read more
Fedden was noted for her domestic, modest-sized still lifes, rich in colour and with an immaculate pattern element, as seen in another joint show with Trevelyan’s work at Bohun Gallery, Henley-on-Thames, in 2003. Fedden shared an exhibition with Edmund Fairfax-Lucy at the New Grafton Gallery in 2005. HM The Queen, Chantrey Bequest for Tate Gallery and Contemporary Art Society bought her work. Lived in London. Was elected RA, 1992.