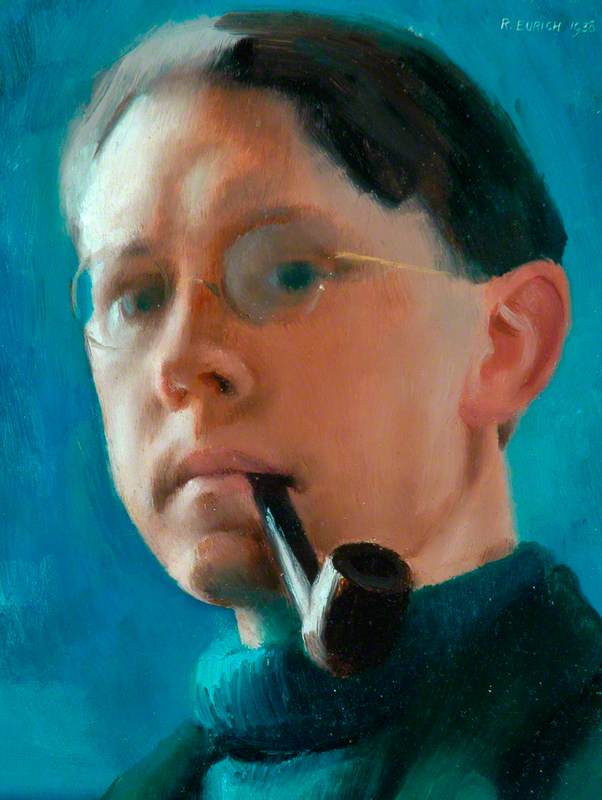 Self Portrait with Pipe 1938

British painter. Born in Bradford, he studied at the *Slade School London, where one of his reports said: ‘This student is being influenced by painters who have not been long enough dead to be respectable.’ In spite of this, for most of Eurich's career, he was identified as a somewhat conservative figure, specializing in atmospheric landscapes and beach scenes, often with a touch of menacing fantasy, as with Men of Straw (1957, Castle Museum, Nottingham). His skill in extensive panoramas was well exploited in his distinguished contributions to the War Artists Advisory Committee scheme (see Official War Art), including an impressive overhead view of the Withdrawal from Dunkirk (1940, National Maritime Museum, London). Survivors from a Torpedoed Ship (1942, Tate) was originally censored by the War Artists Advisory Committee, although Winston Churchill admired the painting and used it as a book illustration.

Read more
It shows two sailors clinging to an upturned boat. Eurich poignantly contrasts their plight to the situation of a seagull which has landed on the boat and is completely free to fly away at any time. Further Reading N. Usherwood, Richard Eurich: From Dunkirk to D‐Day (1991)