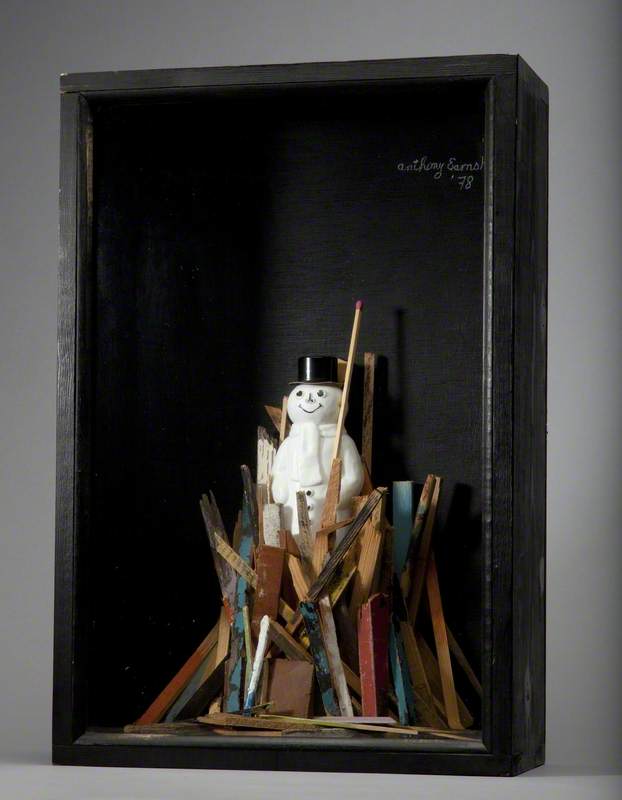 Painter, creator of cartoon strips, prints, boxed assemblages and “books of a sort” and teacher, who was born in Ilkley, Yorkshire. Left school at 14 and worked for a time as an apprentice fitter, lathe turner and crane driver. He was an auto-didact who “through an enthusiasm for poetry discovered Surrealism in the mid-40s ‘which changed my life’”. This started him on making his various artefacts and “all in all making a general nuisance of myself”.

Read more
His assemblages sometimes used found objects and were noted for their biting wit and singular vision. Tony Earnshaw was the subject of several television films. Published a number of shrewd, witty and aphoristic books, titles including Wintersol (with Eric Thacker), 1971; Flick Knives and Forks, 1981; and Carping and Kicking, 1987. His exhibitions included a retrospective at Leeds Institute, 1966; Angela Flowers, 1972; Dean Clough Contemporary Art Gallery, Halifax, 1986–8–92; retrospective at Leeds City Art Gallery, 1987; Graves Art Gallery, Sheffield, 1988; and Flowers East, 2000. After his 1966 show Earnshaw was offered a day’s teaching weekly at Harrogate School of Art, which led to other teaching; in 1972, he was granted a fellowhip at Leeds Polytechnic; then from 1985 concentrated on his own work full-time. Arts Council and Leeds City Art Gallery hold his work. Lived at Saltburn-by-the-Sea, Cleveland.