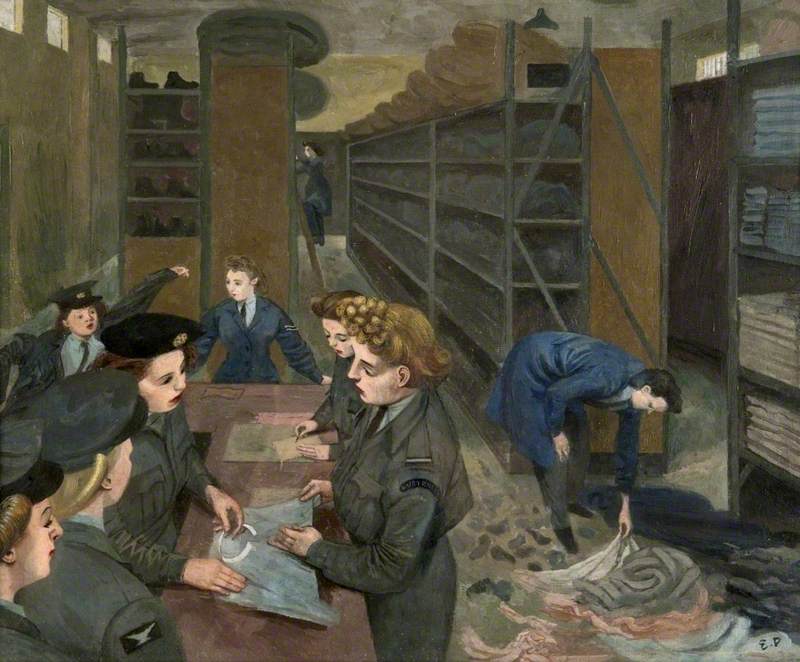 Read more
Although born in Reading, Dunbar's childhood and adolescence were spent in Rochester, where she developed strong skills in draughtsmanship and composition, backed by a highly developed sense of colour. Guidance and encouragement by her mother and her aunt, Florence Dunbar's sister Clara Cowling, by an outstanding teacher of art at Rochester Girl's Grammar School and some success in the mid-1920s in writing and illustrating children's books, all led in 1929 to the award of an exhibition to the Royal College of Art.

At Kensington Road Dunbar came under the influence particularly of the Principal, William Rothenstein (later knighted), Allan Gwynne-Jones, Alan Sorrell, Percy Horton and Cyril (usually known as Charles) Mahoney. In her fourth and postgraduate year she was invited by Mahoney, her mural tutor, to join a team to decorate the hall at Brockley Grammar School for Boys (now Prendergast-Hilly Fields School) with an extensive series of murals, mostly based on Aesop's fables. Started in 1933, they were inaugurated to acclaim in 1936.

During this time Dunbar and Mahoney formed a close personal relationship, partly built on a mutual love of plants and gardening, which led to the jointly written and illustrated ‘Gardeners' Choice’, advocating a radical and unconventional approach to gardening. The relationship withered under political differences and the unrealistic expectations each had of the other. They separated in 1937 as ‘Gardeners' Choice’ went to press. So began what Dunbar called her 'crisis' years, marked at first by a steady output of mostly horticultural paintings, but gradually dwindling until in 1938 she was obliged to work behind the counter in her sisters' haberdashery shop.

In December 1939 Sir William Rothenstein suggested she should apply for employment as a war artist. Her application to the War Artists' Advisory Committee was accepted; her remit was to cover the home front activities of women's organisations, the Women's Voluntary Service, nursing and hospital activities, the Women's Auxiliary Air Force, the Auxiliary Territorial Service and - for which Dunbar is best known – the Women's Land Army. Uniquely among her female colleagues she remained on a series of rolling employment contracts throughout the war, and by 1945 she had submitted 44 pieces. All, in their way, illustrate growth and regeneration, with subtle but cogent overtones of feminism and occasional appearances of a certain playful wit.

In 1942 Dunbar married Roger Folley, a horticultural economist then serving in the RAF. After the war they set up home in the Midlands. While Folley worked at Oxford University, Dunbar taught at the Ruskin School of Art. Allegory seized her interest. Allegorical paintings, sometimes biblical, sometimes from literary allusions, marked her immediate post-war period. In 1950 Folley was appointed to a senior post at Wye College, in Kent. In following him to Kent, Dunbar felt to some extent exiled from the coterie of artists with whom she had worked and exhibited in Oxford. Landscape and portraiture began to occupy her, and her only solo exhibition, held in Wye in 1953, reflected this widening of her outlook.

Dunbar died of heart failure in May, 1960, at the age of 53, her Christian Science having deterred her from seeking medical help. Thereafter Dunbar and her work sank into obscurity until 2006, when a centenary exhibition was held at the St Barbe Museum and Art Gallery, Lymington, curated by Dr Gill Clarke, whose biography ‘Evelyn Dunbar: War and Country’ appeared simultaneously.

After Dunbar's death, Folley consigned her vast residual studio – she rarely discarded anything – to her siblings. Nothing was heard of it until 2013, when it was rediscovered in the cone of an oast house. Some 900 pieces of work, covering her entire career, were assessed and identified by Christopher Campbell-Howes (Dunbar's nephew) and Paul Liss, of Liss Llewellyn, to form the basis of the 'Lost Works' exhibition at Pallant House, Chichester, in 2015.