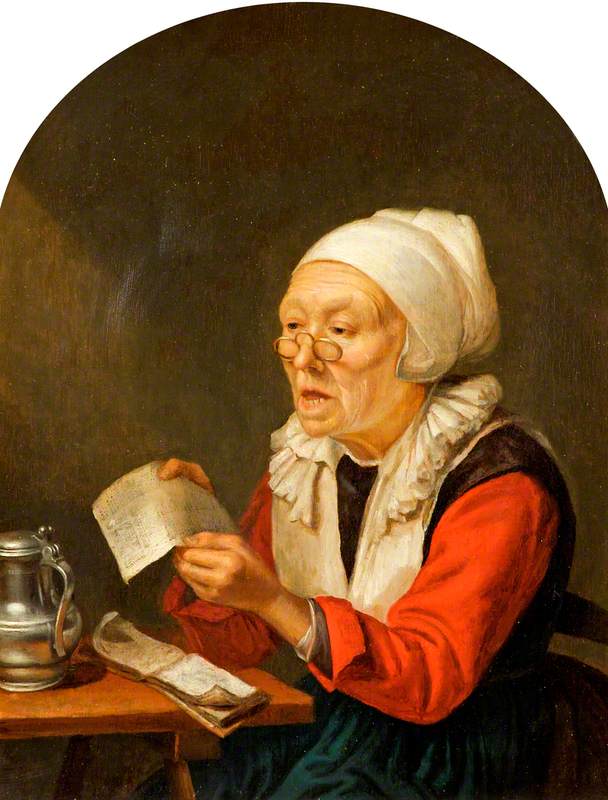 (b Leiden, 7 Apr. 1613; bur. Leiden, 9 Feb. 1675). Dutch painter. He spent all his career in Leiden, where he became the first pupil of the young Rembrandt in 1628. His early work was closely based on his master's, but after Rembrandt moved to Amsterdam in 1631/2, Dou developed a style of his own characterized by minute detail and a surface of almost enamelled smoothness (he had initially trained in his father's profession of glass engraving and this background must have helped instil a love of glossy surfaces). He was astonishingly fastidious about his tools and working conditions, with a particular horror of dust, and sometimes painted with the aid of a magnifying glass. In about 1640 he was visited by Sandrart, who ‘praised the great care that he had lavished on painting a broomstick hardly larger than a fingernail’, only for Dou to reply that ‘he would need three more days to finish it’.

Read more
He painted various subjects, but is best known for domestic interiors. They usually contain only one or two figures framed by a window or by the drapery of a curtain, and surrounded by books, musical instruments, or household paraphernalia. He was renowned for his skill with night scenes. With Jan Steen, Dou was among the founders of the Guild of St Luke at Leiden in 1648. Unlike Steen he was prosperous and respected throughout his life; indeed he had an international reputation and turned down an invitation from Charles II to visit England. His pictures continued to fetch big prices (consistently higher than those paid for Rembrandt's work) until the advent of Impressionism influenced taste against the neatness and precision of his style. Dou had a workshop with many pupils who perpetuated his style (notably Schalken), and Leiden continued the fijnschilder (fine painter) tradition into the 19th century.