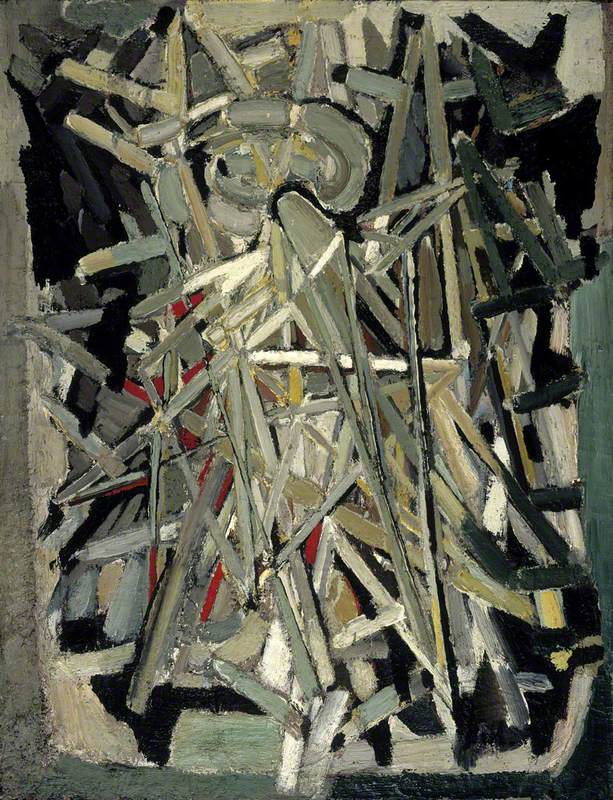 Russian-born painter and printmaker who became a French citizen in 1948. He was born in St Petersburg, son of Baron Vladimir Ivanovich de Staël-Holstein. In 1919 his family was forced to leave Russia because of the Revolution (he would later become incensed if anyone suggested they had ‘fled’) and moved to Poland. Both parents had died by 1922 and Nicolas and his two sisters were adopted by a family of Russian expatriates in Brussels, where he studied at the École des Beaux-Arts, 1932–6. In the next two years he travelled widely (France, Italy, Spain, North Africa), then in 1938 settled in Paris, where he studied briefly with *Léger. On the outbreak of war in 1939 he joined the Foreign Legion and was sent to Tunisia. He was demobilized in 1941 and moved to Nice, where he turned from figurative to abstract art, although the forms he used were usually suggested by real objects.

Read more
In 1943 he returned to Paris, where he had his first one-man exhibition the following year at the Galerie L'Esquisse. After the war he quickly gained a reputation as one of the leading abstract painters of the *École de Paris, his work showing a sensuous delight in handling paint that was unrivalled at the time. Typically his works feature luscious blocks or patches of thick paint (often applied with a knife), subtly varied in colour and texture. In 1951 he began to reintroduce figurative elements into his work, his subjects including suggestions of landscapes and still-life (Landscape Study, 1952, Tate). From 1952 he spent much of his time working in the bright light of the South of France, and his late works are often very intense in colour. In spite of critical and financial success, de Staël felt that he had failed to reach a satisfactory compromise between abstraction and figuration, and he committed suicide. Further Reading R. Wollheim, ‘Yellow Sky, Red Sea, Violet Sands’, London Review of Books (24 July 2003)