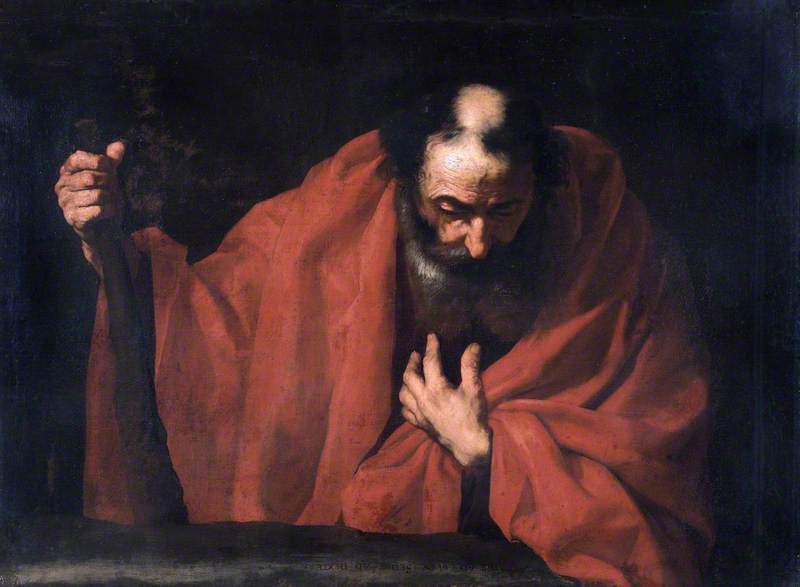 (bapt. Játiva, nr. Valencia, 17 Feb. 1591; d Naples, 3 Sept. 1652). Spanish painter, etcher, and draughtsman, active for all his known career in Italy, where he was called ‘Lo Spagnoletto’ (the little Spaniard). He is recorded in Parma in 1611 and Rome in 1613, but little is known of his life before he settled in Naples (at the time a Spanish possession) in 1616. Naples was then one of the main centres of the Caravaggesque style, and Ribera is often described as a follower of Caravaggio. However, although his early work is markedly tenebrist, it is much more individual than that of most Caravaggesque artists, particularly in his vigorous and scratchy handling of paint, and his later works are far removed from Caravaggio in style—rich in colour and soft in modelling.

Read more
Similarly, his penchant for the typically Caravaggesque theme of bloody martyrdom has been overplayed, enshrined as it is in Byron's lines: ‘Spagnoletto tainted ǀ His brush with all the blood of all the sainted’ (Don Juan, xiii. 71). He did paint some powerful scenes in this vein, notably the Martyrdom of St Philip (1639, Prado, Madrid; formerly identified as the Martyrdom of St Bartholomew), but his treatment is invariably dignified rather than merely gory. Moreover he was capable of great tenderness, as in the Adoration of the Shepherds (1650, Louvre, Paris), and his work is remarkable for his feeling for individual humanity. This feature is evident in his secular pictures as well as his religious works, for example in the Clubfooted Boy (1642, Louvre). His range of secular subjects was fairly wide, for he was the first Spanish painter to show much interest in mythological themes (Apollo and Marsyas, 1637, Mus. Royaux, Brussels) and he also created a novel type of picture showing philosophers as beggars or vagabonds (Archimedes, 1630, Prado). He was the leading painter in Naples in his period (Velázquez visited him during his second visit to Italy and probably during his first) and his work was influential in Spain (where much of it was exported) as well as in Italy. Giordano was perhaps among his pupils. His reputation remained high after his death, and until the Napoleonic Wars he and Murillo were virtually the only Spanish painters whose work was widely known outside their native country.