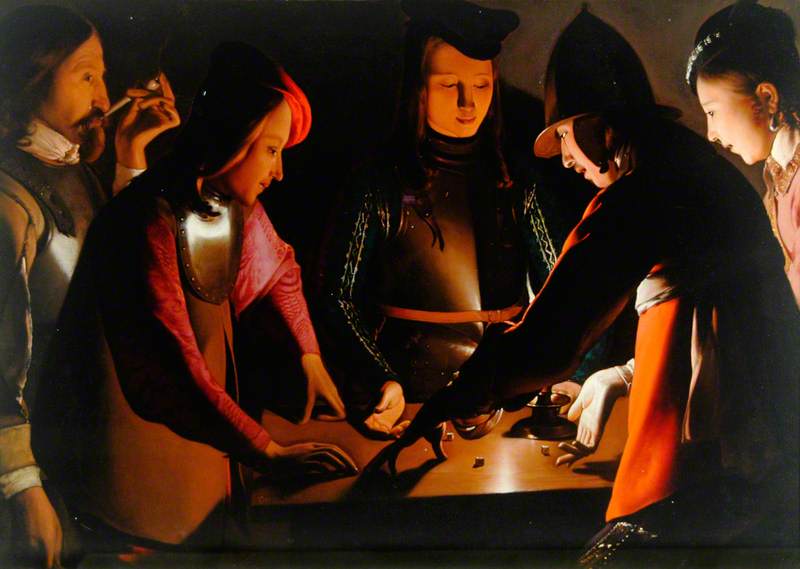 (bapt. Vic-sur-Seille, Lorraine [now Moselle], 14 Mar. 1593; d Lunéville, Lorraine [now Meurthe-et-Moselle], 30 Jan. 1652). French painter, active at Lunéville in the Duchy of Lorraine; it was his wife's home town and he settled there in 1620, three years after his marriage. He had a fairly successful career (his paintings were owned by Louis XIII, Cardinal Richelieu, and the Duke of Lorraine), but his name sank into oblivion after his death and it was not until the 20th century that he was rediscovered and hailed as the most inspired of Caravaggesque painters. Little is recorded of his life (although he is known to have been arrogant and unpopular with his neighbours) and it is uncertain how he gained his knowledge of Caravaggio's style. Possibly he visited Italy early in his career, but he could also have learned at second hand through a local intermediary such as Jean Le Clerc, who had worked with Saraceni in Rome and returned to Lorraine in 1622, or via painters of the Utrecht School such as Honthorst.

Read more
Like Honthorst, he is particularly associated with nocturnal scenes and with the use of a candle as the light source in a painting. La Tour's handling of light is more subtle and sensitive, however, and he is grander in conception and more sombre in mood. In his mature work he smoothed the forms of his figures until they approached geometric simplicity and achieved a feeling of monumental stillness that is considered to represent the spirit of 17th-century French classicism no less than the paintings of Philippe de Champaigne and Poussin in their different fields. Several of La Tour's paintings are signed, but only three of them bear a date: the Payment of Taxes (date barely legible—various readings have been proposed; Picture Gal., Lviv, Ukraine); Penitent St Peter (1645, Cleveland Mus. of Art); the Denial of St Peter (1650, Mus. B.-A., Nantes), and there is much scholarly debate about his chronology. The works associated with the beginning of his career are daylit scenes of such subjects as peasants and card-sharpers; they are very different in spirit from the calm and majestic religious images of his maturity and have become controversial as regards attribution as well as dating. It has been argued (and hotly disputed) that the Fortune Teller (Met. Mus., New York) is a modern fake, and although the status of most of the other early works as authentic (and high-quality) 17th-century French paintings is not denied, their attribution to La Tour (which rests almost entirely on stylistic evidence) has been questioned. Another problem in La Tour studies is that several of his undeniably authentic compositions exist in more than one version, and these are sometimes so accomplished that it is difficult to decide which (if any) is the original and which the studio replica: the versions of St Sebastian Tended by St Irene in the Louvre, Paris, and the Gemäldegalerie, Berlin, for example, are each very beautiful but do not appear to be by the same hand. La Tour's son Étienne (1621–92) worked in his father's studio and may have been responsible for some of the replicas. No independent works certainly by him are known, but the Education of the Virgin (Frick Coll., New York), signed ‘de la Tour’, has been attributed to him.