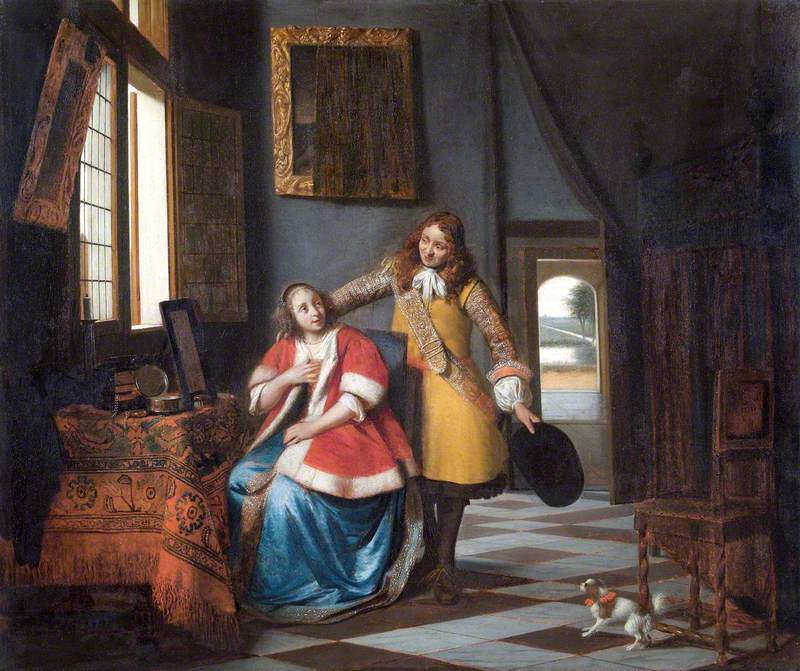 The Intruder: A Lady at Her Toilet Surprised by Her Lover 1665

(bapt. Rotterdam, 20 Dec. 1629; bur. Amsterdam, 24 Mar. 1684). Dutch genre painter. He was born in Rotterdam, is said to have studied in Haarlem (as a pupil of Berchem), and spent the last two decades of his life in Amsterdam, but he is particularly associated with Delft. His period of residence there was fairly brief (c.1655–c.1661), but during this time he painted the pictures on which his reputation rests—a small number of tranquil masterpieces that perfectly evoke the well-being of his peaceful and prosperous country. Typical subjects include a sunny yard (Courtyard of a House in Delft, 1658, NG, London) or light streaming into the interior of a corner of a burgher's house (The Pantry, c.1658, Rijksmuseum, Amsterdam). There is a kinship of spirit with his great Delft contemporary Vermeer, and de Hooch sometimes approaches him in delicate observation of light and lucidity of composition, although not in beauty of brushwork.

Read more
After de Hooch moved to Amsterdam in the early 1660s, however, the quality of his paintings was less remarkable than their quantity. Instead of the simple brick and plaster settings of his earlier groups he chose sumptuous marble interiors, and towards the end these backgrounds acquired something of the harsh quality of a stage backdrop. He died in a madhouse.