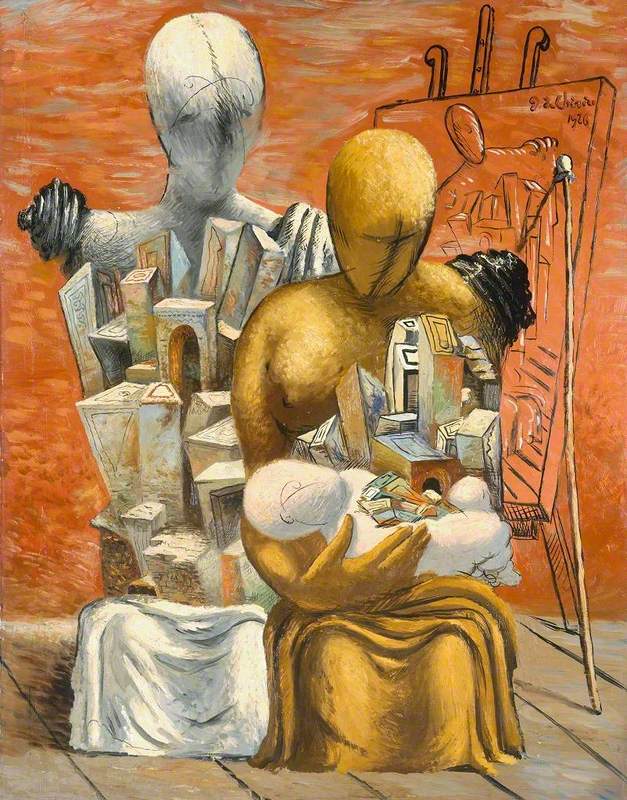 Italian painter, sculptor, designer, and writer, the originator of *Metaphysical Painting. He was born at Volo in Greece, the son of a railway engineer who was working there, and had an old-fashioned training at the Athens Polytechnic, 1903–5, followed by a year at the Academy in Florence, 1905–6. When his father died in 1906 his mother moved the family to Munich for the sake of her sons' education; Giorgio studied at the Academy and his brother, who later adopted the name Alberto *Savinio, continued his musical training under the composer Max Reger. De Chirico found the instruction at the Academy boring, but he was influenced by the *Symbolist work of Max *Klinger and the Swiss painter Arnold Böcklin (1827–1901), with their juxtaposition of the commonplace and the fantastic.

Read more
In 1909 he moved to Italy (dividing his time between Florence, Milan, and Turin) and there painted his first ‘enigmatic’ pictures, which convey an atmosphere of strangeness and uneasiness through their empty spaces, illogical shadows, and unexpected perspectives. In 1911 he joined his brother in Paris, where he lived until 1915, becoming friendly with many members of the avant-garde, including *Apollinaire (who championed his work) and *Picasso. During this period he developed a more deliberate theory of ‘metaphysical insight’ into a reality behind ordinary things by neutralizing the things themselves of all their usual associations and setting them in new and mysterious relationships. In order to empty the objects of his paintings of their natural emotional significance he painted tailors' dummies as human beings (from 1914)—an innovation in which he was influenced by his brother. In 1915 de Chirico (with his brother) was conscripted into the Italian army and sent to Ferrara. There he suffered a nervous breakdown, and in 1917 met *Carrà in the military hospital and converted him to his views, launching Metaphysical Painting as a movement. It was short-lived, virtually ending when de Chirico and Carrà quarrelled in 1919, but it was highly influential on *Surrealism, and it was during the later 1920s, when Surrealism was becoming the most talked-about artistic phenomenon of the day, that de Chirico's international reputation was established. However, it was his early work that the Surrealists admired and they attacked him for adopting a more traditional style in the 1920s, when his output included some distinctive pictures featuring horses on unreal sea-shores with broken classical columns. In the 1920s and 1930s he spent much of his time in Paris (and in 1935–7 he lived in the USA) before settling permanently in Rome in 1944. He produced numerous replicas and variants of his early work, sometimes unscrupulously passing them off as earlier originals (which led to considerable controversy and more than one lawsuit). His other work included a number of small sculptures (mainly from the last decade of his life) and set and costume designs for opera and ballet; his writings include a Surrealistic novel, Hebdomeros (1929), and two volumes of autobiography (1945 and 1960), translated into English as The Memoirs of Giorgio de Chirico (1971). For most of his life, his later more classicizing painting was comparatively disregarded: it was viewed as repetitive and overmuch concerned with technical refinement. De Chirico's personal statements, as well as his self-portraits casting himself in the guise of a 16th-century gentleman, reinforced the image of a once innovatory artist who had become disenchanted with the art of the time in which he lived. The late works, however, enjoyed something of a revival in the 1980s with the interest in a new wave of *Neoclassical painters such as *McKenna and *Mariani. His influence has also extended into recent sculpture. De Chirico's idea that statues would have a greater presence if brought off their pedestals and stood directly on the floor occupying the same space as the viewer has had a resonance for the work of such sculptors as Juan *Muñoz and Katharina *Fritsch. Further Reading I. Far, De Chirico (1976)