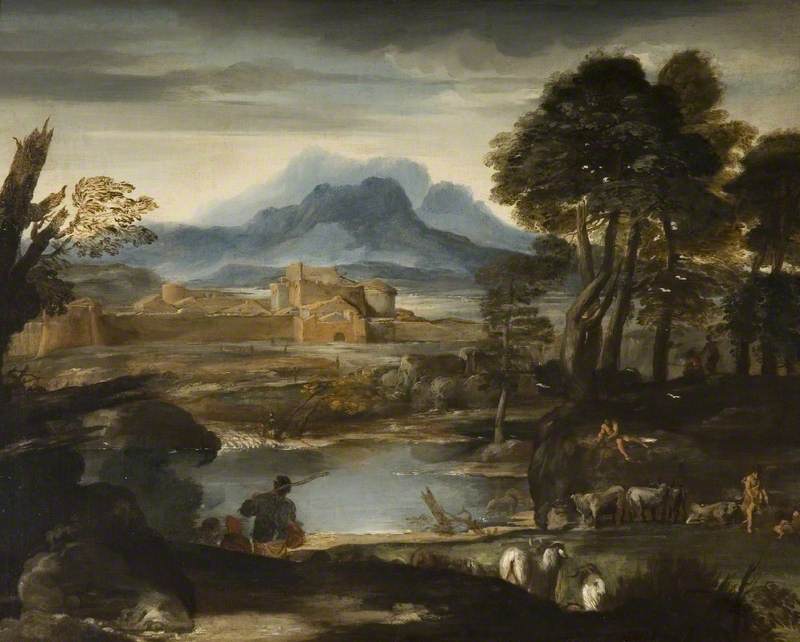 (b Cortona, Tuscany, 1 Nov. 1596; d Rome, 16 May 1669). Italian painter, architect, decorator, and designer, second only to Bernini as the most versatile genius of the full Roman Baroque style. He is named after the town of his birth, where he probably had some training with his father, a stonemason, before settling in Rome in about 1612. His first major works there were frescos in the church of S. Bibiana (1624–6), commissioned by Urban VIII (Maffeo Barberini), and the patronage of the Barberini family played a major part in his career. For their palace he painted his most famous work, a huge fresco, Allegory of Divine Providence and Barberini Power, on the ceiling of the Gran Salone. He began this in 1633, but interrupted the work in 1637 to go to Florence, where he painted two frescos commissioned by the Grand Duke Ferdinand II de' Medici on the walls of the Sala della Stufa in the Pitti Palace: the Golden Age and the Silver Age.

Read more
After returning to Rome he completed the Barberini ceiling in 1639. One of the key works in the development of Baroque painting, it is a triumph of illusionism, for the centre of the ceiling appears open to the sky and the figures seen from below (di sotto in sù) appear to come down into the room as well as soar out of it. It demonstrates Cortona's belief, which came out in a debate with Andrea Sacchi in the Accademia di S. Luca in about 1636, that a history painting could be compared with an epic and was entitled to use many figures; Sacchi, intent on classical simplicity and unity, argued for using as few figures as possible. For most of the period from 1640 to 1647 Cortona again worked in Florence, continuing his decorations in the Pitti Palace. He first completed his Four Ages of Man decorations in the Sala della Stufa with the Bronze Age and the Iron Age, then began a series of allegorical ceiling paintings in five rooms named after the planets (the work was completed by his pupil Ciro Ferri (1634–89). These paintings are combined with sumptuous stucco ornamentation, and this form of decoration was widely influential, not only in Italy, but also in France. (Cortona turned down an invitation from Cardinal Mazarin to visit Paris, but his style was taken there by his best pupil, Romanelli.) From 1647 until his death Cortona again worked in Rome, his major paintings from this period being an extensive series of frescos in S. Maria in Vallicella (the Chiesa Nuova, 1647–65), in which, as in his Pitti decorations, paint and stucco are magnificently combined. Throughout his career he painted easel pictures of religious and mythological subjects, and he also designed cartoons for a number of tapestries on the history of Constantine (1626–41) for the Palazzo Barberini (now in the Philadelphia Museum of Art), completing a series that had been begun by Rubens.Cortona once wrote that architecture was merely a pastime for him, but he ranks among the greatest architects of his period. His masterpiece is the church of SS. Martina e Luca in Rome (1635–50), which was the first Baroque church designed and built as a complete unity. Although his architecture has all the vigour of his painting, there is less correspondence between the two fields than might be imagined. He never decorated any of his own churches, and indeed they were not designed with fresco decoration in mind, making their impact through grandeur of form rather than richness of ornament. His great contemporary reputation sank in the next century with those of many other Baroque artists. In a famous passage in his Dizionario delle belle arti (1797), Francesco Milizia wrote: ‘Borromini in architecture, Bernini in sculpture, Pietro da Cortona in painting…represent a diseased taste—one that has infected a great number of artists.’