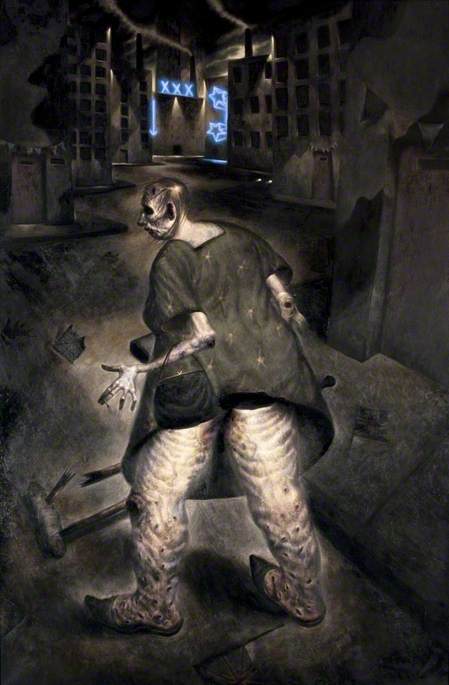 Scottish painter, the most overtly political of the *Glasgow School which emerged in the 1980s. Born in North Shields to Scottish parents, he studied at *Glasgow School of Art between 1978 and 1983. While a student he discovered a strain of socially committed realist painting in the work of *Dix, *Grosz, and *Rivera. His paintings deal with issues of working-class solidarity and self-improvement but also with despair at contemporary conditions. Edge of the City (1987, Manchester Art Gallery) shows an environment of derelict factories and burnt-out cars in Currie's characteristic dark colouration and *Expressionist drawing. In 1987 Currie made a series of murals on the history of workers' struggle in Glasgow for the People's Palace, Glasgow, beginning with the massacre of weavers in 1787 and concluding with a future in which enlightenment is suggested by miners' lamps.

Read more
There has been some debate as to how far Currie's murals should be taken straight and unironically, which the artist appears to claim, and how far they should be regarded as parodying a past tradition of *Social Realism. Their optimistic vision is hardly reflected in more recent work which deals with the effects of death and decay on the body in a somewhat photographic manner, in contrast with his vividly graphic early style. http://www.glasgowmuseums.com/venue/showExhibition.cfm?venueid=9&itemid=95&Showid=69 A site that provides illustrations of Currie's murals at the People's Palace.