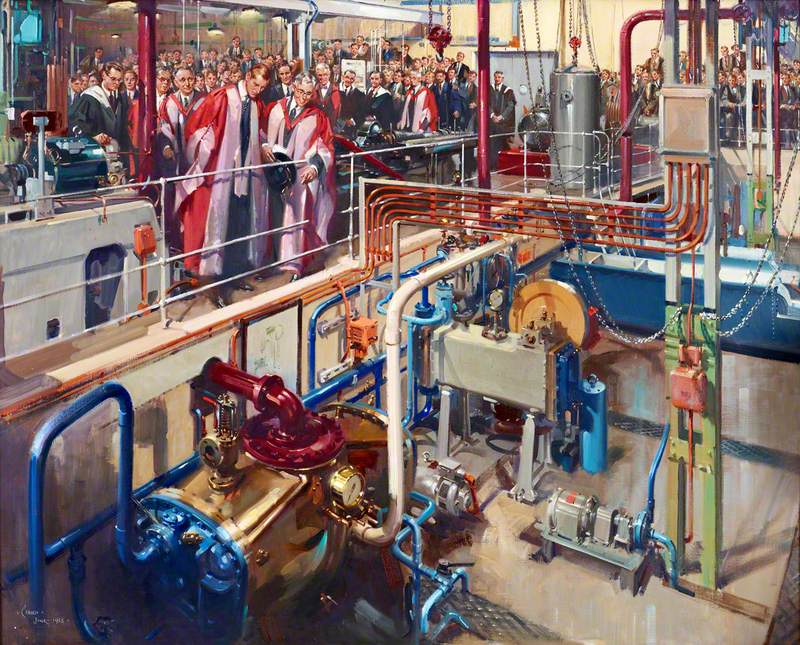 Visit of HRH The Duke of Edinburgh to the Department of Engineering, 13 November 1952

Department of Engineering, University of Cambridge

British painter and illustrator, born in London. His parents were illustrators: the American-born Cyrus Cuneo (1879–1916) and Nell Tenison (1867–1953). They gave Cuneo his initial instruction in art, but his main training was at Chelsea School of Art and the *Slade School. In the 1930s he worked primarily as an illustrator, but after the Second World War (in which he served in the Royal Engineers and was an *Official War Artist) he turned more to painting. His work included official portraits, ceremonial, military, and engineering subjects (particularly railways), and fantasy scenes (typically featuring anthropomorphized mice). His autobiography, The Mouse and his Master, was published in 1977 and The Railway Painting of Terence Cuneo in 1984.

Read more
A statue to him by Philip Jackson (unveiled 2004) stands in Waterloo Station.