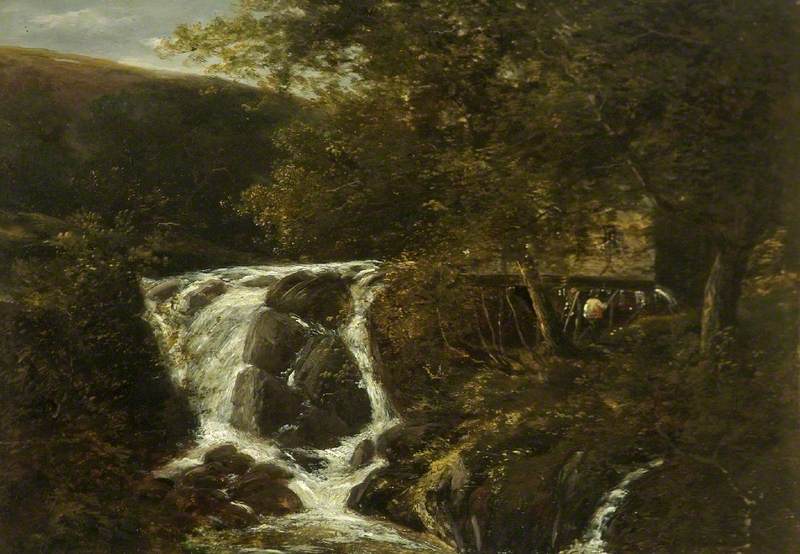 Landscape with a Waterfall near Norwich, Norfolk, 1819

(b Norwich, 22 Dec. 1768; d Norwich, 22 Apr. 1821). English landscape painter and etcher, with Cotman the major artist of the Norwich School. Whereas Cotman was primarily a watercolourist, Crome painted mainly in oils. He was based in Norwich all his life, earning a major part of his living as a drawing master; he made regular trips to London and visited other parts of the country, but his only journey abroad was to Paris in 1814 to see the exhibition of pictures looted by Napoleon.

Read more
Of humble origin, he was first apprenticed to a coach- and sign-painter and taught himself principally by copying works in the collection of Thomas Harvey, a local collector and amateur painter who befriended him. The Dutch painters Ruisdael and Hobbema were particularly influential on him and he also admired Gainsborough and Wilson, but his work was based as much on direct observation of nature as on study of the Old Masters. His favourite subjects included heathland, woods, and tranquil stretches of river, and his style was fresh, clear, and unaffected. In addition to his paintings he made 34 etchings, which were posthumously published by his widow and his eldest son John Bernay Crome (1794–1842). The elder Crome is sometimes referred to as ‘Old Crome’ to distinguish him from his son, who painted in his manner but with less distinction.