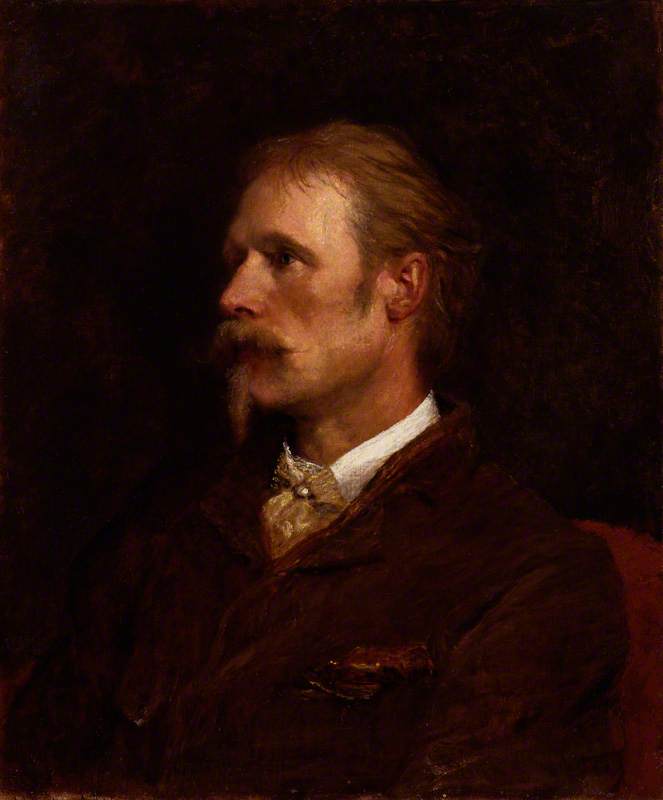 National Portrait Gallery, London
(b Liverpool, 15 Aug. 1845; d Horsham, Sussex, 14 Mar. 1915). British illustrator, designer, painter, writer, and administrator. His career was very varied, but he is best remembered today as an illustrator of children's books, a field in which he was prolific throughout his life. He took this work very seriously, believing that ‘We all remember the little cuts that coloured the books of our childhood. The ineffaceable quality of these early pictorial and literary impressions affords the strongest plea for good art in the nursery and the schoolroom.’ His work for adults included designing wallpaper, and he was a leading figure in the Arts and Crafts Movement that tried to rehabilitate good design and craftsmanship. He was greatly interested in art education, serving on various examination boards; in the 1890s he taught in Manchester and Reading, and in 1898–9 he was principal of the Royal College of Art.

Illustrator and painter born in Liverpool. As a young man of fourteen he was apprenticed to William James Linton an engraver, 1859–62. He also furthered his art studies at Heatherley's in London.

In 1863, he met Edmund Evans, the pioneer of colour printing, and they soon began to produce the long series of cheap children's picture books that made Crane's name. From 1867, he also worked for the Dalziel brothers and his work was reproduced in the periodicals 'Once a Week' and 'Fun'. About this time he began to exhibit his paintings and showed at the Dudley Gallery and eventually at every major gallery of his time. These included exhibits at the RA, FAS, GI, RI, Walker Art Gallery, Liverpool, Leicester Galleries, London Salon, with the Society of Painters in Tempera, RBA, RHA, ROI, RSA and at the RWS, of which he was an elected member.

He was also much concerned with art education, and was appointed as an Examiner in Design to the Board of Education to London County Council and the Scottish Board of Education, Director of Design at Manchester School of Art 1893–97, Director of the Art Department at Reading University in 1898 and he was Principal of the Royal College of Art, 1898–99. Crane was the founder and first Master of the Art Workers' Guild in 1884 and became the first President of the Arts and Crafts Exhibition Society. He was a contributor to the AWQ and his work is in the collection of Aberdeen Art Gallery, Tate Gallery, London, Manchester City Art Gallery, Dundee University Fine Art Collection, Scotland and in the Courtauld Institute of Art, London. A little-known fact about Crane is that he designed stained glass windows.