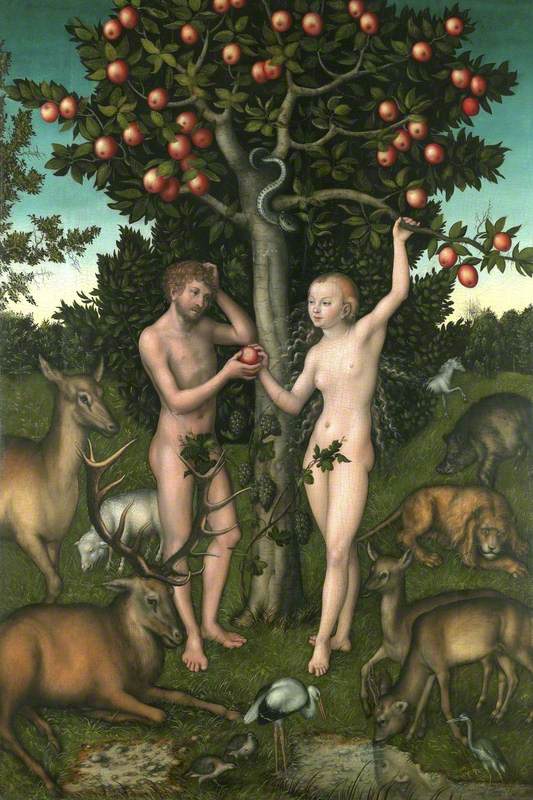 (b Kronach, Franconia, 1472; d Weimar, 16 Oct. 1553). German painter and designer of woodcuts. He takes his name from the small town in south Germany where he was born. Very little is known of his life before he moved to Vienna in 1501/2 and started working for the humanist circles associated with the newly founded university. His stay in Vienna was brief (he left in 1504), but in this period he painted some of his finest and most original works. They include portraits, notably those of Johannes Cuspinian, a lecturer at the university, and his wife Anna (1502–3, Reinhart Coll., Winterthur), and several religious works in which he shows a remarkable feeling for the beauty of landscape characteristic of the Danube School. The finest example of this manner is perhaps the Rest on the Flight into Egypt (Gemäldegalerie, Berlin), which shows the Holy Family resting in the glade of a German pine forest.

Read more
It was painted in 1504, just before Cranach moved to Wittenberg as court painter to Frederick III (the Wise), Elector of Saxony.Cranach lived in Wittenberg until 1550, when he followed the Elector John Frederick (the Unfortunate) into exile, to Augsburg, Innsbruck, and finally Weimar. During his time in Wittenberg he became extremely wealthy and one of the city's most respected citizens, serving as burgomaster for several years. His paintings were eagerly sought by collectors, and his busy studio often produced numerous replicas of popular designs, particularly those in which he showed his skill at depicting female beauty—more than ten versions are known of his Reclining Nymph. He excelled at such erotic nudes, which are influenced by Italian Renaissance models but totally different in spirit, and he also had a penchant for pictures of coquettish women wearing large hats, sometimes shown as Judith or the goddesses in the Judgement of Paris. The most innovative works of his Wittenberg period, however, are probably his full-length portraits (The Duke and Duchess of Saxony, 1514, Gemäldegalerie, Dresden). Wittenberg was at the centre of the Protestant Reformation and Cranach supported the Lutheran cause. He painted several portraits of Luther and also designed the woodcut illustrations for his translation of the New Testament (1522). However, always an astute businessman, he also worked for Catholic patrons. During his later years he was assisted by his son, Lucas the Younger (1515–86), who eventually took over the workshop and imitated his father's style so successfully that it is often difficult to distinguish between their hands.