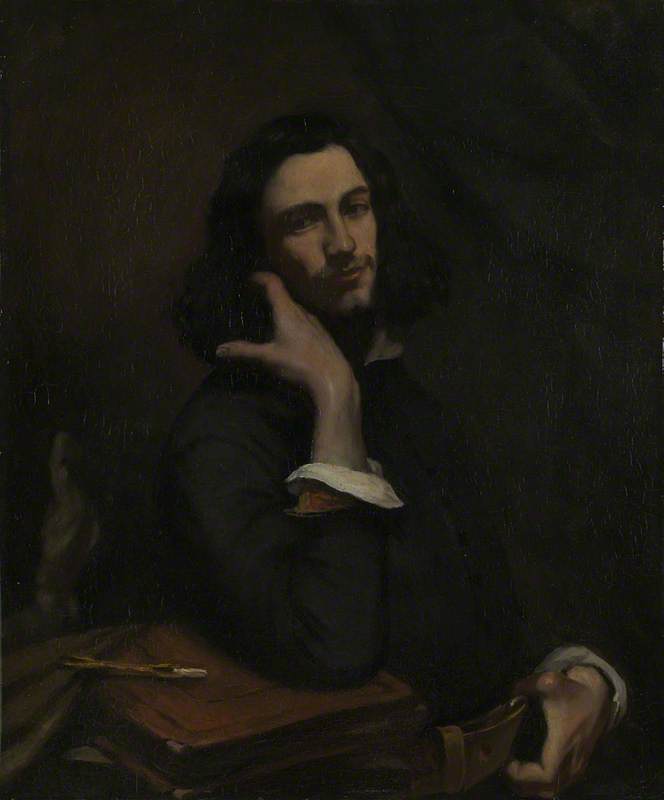 (Born Ornans, Franche-Comté, 10 June 1819; died La Tour de Peilz, Switzerland, 31 December 1877). French painter, one of the most powerful personalities in 19th-century art. He was the son of a prosperous farmer at Ornans, at the foot of the Jura Mountains, near the Swiss border. His country upbringing was important to his art, for although he spent most of his career in Paris, he rarely painted urban subjects (‘His palette smells of hay’, Cézanne said of him). He was a man of independent character and obstinate self-assurance, and claimed to be self-taught. In fact he studied with various minor masters in Ornans, Besançon and Paris, where he moved in 1839, but he learnt more from copying the work of 17th-century naturalists such as Caravaggio and Velázquez in the Louvre. It was largely from them that he derived his very solid and weighty style, with its strong contrasts of light and shade. His earliest pictures (including several narcissistic self-portraits) were in the Romantic tradition, but with three large canvases exhibited at the Salon of 1850 he established himself as leader of the Realist movement: these are A Burial at Ornans (Mus. d'Orsay, Paris), Peasants at Flagey (Mus. B.-A., Besançon), and The Stone Breakers (formerly in Dresden, but destroyed in the Second World War). The huge burial scene in particular made an enormous impact: it was attacked in some quarters for its alleged crudity and deliberate ugliness, but also hailed for its powerful naturalism (he got the idea for the picture at his grandfather's funeral). Never before had a scene from everyday life been presented in such an epic manner and Courbet was cast in the role of a revolutionary socialist. He gladly accepted this role (although it is unlikely that he painted the picture with political intention) and he became a friend and follower of the anarchist philosopher Pierre-Joseph Proudhon, collaborating on his book On Art and its Social Significance (1863). Courbet's boldness and self-confidence are as evident in his technique as in his choice of subjects. He often used a palette knife to apply paint and his work shows an unprecedented relish for the physical substance of his materials.

Read more
Courbet's unconventionality and hatred of authority were expressed most forcefully in 1855, when two of his paintings were rejected for exhibition at the Paris Exposition Universelle (World Fair); instead he organized a one-man show in a building he titled ‘The Pavilion of Realism’ situated near the Exposition entrance. The painting that formed the centrepiece of the show (one of the two rejected pictures) is now his most celebrated work, The Painter's Studio (1854–5, Mus. d'Orsay). This huge canvas (6 m [20 ft] wide) was subtitled by Courbet ‘a real allegory [a seeming contradiction in terms] summing up seven years in my artistic life’. He wrote a long (but not very clear) account of it, describing it as ‘the moral and physical history of my studio’ and saying it showed ‘all the people who serve my cause, sustain me in my ideal and support my activity’. These friends and mentors (among them Baudelaire) are depicted on the right, and on the left are symbolic figures of the poor and their exploiters. Between the two groups Courbet sits proudly at his easel, watched by a magnificent nude female model. In presenting himself as the artist-hero, and in taking as his subject the activity of creating art, he sounded a note that reverberated into the 20th century. Interpretations of the picture have been many and varied: it has been seen as an esoteric representation of Freemasonry, for example, or more plausibly as containing a covert attack on Napoleon III. The exhibition was not well attended and many of the people who did see it were baffled or repelled by the picture's mixture of allegory, portraiture, and social comment.

Subsequently Courbet's work became less doctrinaire. His colours were less sombre and he often chose more obviously attractive subjects—landscapes from the Forest of Fontainebleau, the Jura, or the Mediterranean, seascapes, still lifes, or comely and sensual nudes. However, he retained his radical outlook, and following the abdication of Napoleon III in 1870, he was appointed head of the arts commission of the Commune, the short-lived revolutionary government of Paris. When the Commune was suppressed by government troops, he was sentenced to six months' imprisonment for his role in the destruction of the Vendôme Column, a symbol of Bonapartism. He was released in 1872, but the following year he was decreed to be personally responsible for the cost of re-erecting the Column. Unable to pay and fearing arrest, he went into exile in Switzerland. He stayed there for the remaining four years of his life, painting mainly landscapes and portraits.

Courbet's resounding rejection of idealization and his concentration on the tangible reality of things had an enormous influence on 19th-century art: ‘Superbly plebeian…Courbet acted as the bull that smashed the china shop of polite art, whether academic or preciously avant-gardist, thus enabling a new generation (including the Impressionists) to concentrate on the problem of expressing visual experience’ (Lorenz Eitner, An Outline of 19th Century European Painting, 1987). ‘Painting’, he said, ‘is an art of sight and should therefore concern itself with things seen; it should, therefore, abandon both the historical scenes of the classical school and poetic subjects from Goethe and Shakespeare favoured by the Romantic school.’ When asked to include angels in a painting for a church, he replied: ‘I have never seen angels. Show me an angel and I will paint one.’