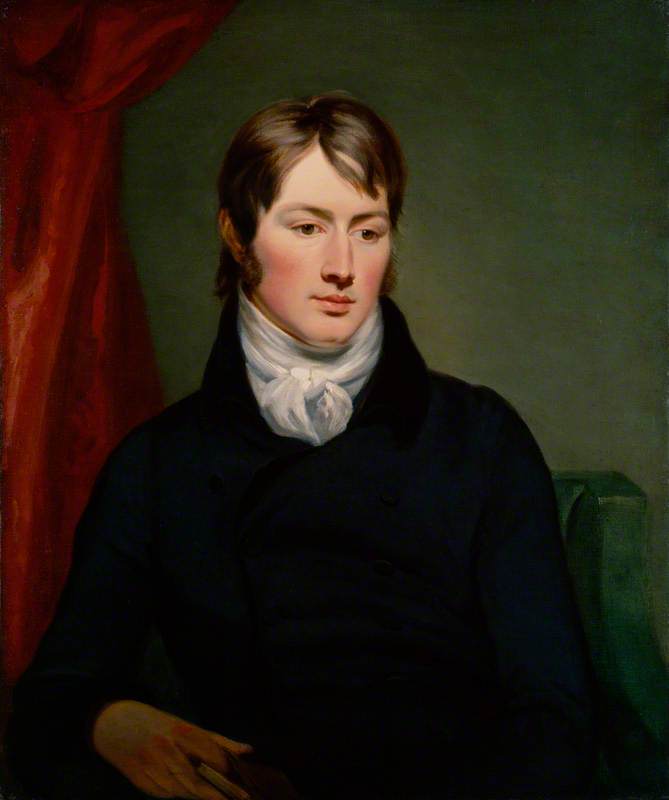 (Born East Bergholt, Suffolk, 11 June 1776; died Hampstead, Middlesex [now in London], 31 March/1 April 1837). English painter, ranked with his contemporary Turner as one of the two greatest figures in the history of British landscape painting. Both of them brought a new freedom and inventiveness to their subject and they had a good deal of mutual respect. However, their temperaments and goals differed greatly and their careers were strongly contrasting. Whereas Turner was precocious and soon achieved critical and financial success, Constable was slow to mature and had difficulty in making a name in England (he was more appreciated in France).

Read more
He was the son of a prosperous corn merchant, and was trained for a career in the family business. However, his passion for art was so strong that in 1799 his father reluctantly allowed him to become a student at the Royal Academy Schools in London. He continued studying there until 1802, and during this time he also had informal tuition from his friend Sir George Beaumont (whom he first met in 1796). However, he learnt most by copying the work of great landscape masters of the past, so essentially he was self-taught. He continued living in London, but he spent much of his time painting in his home area (now known as ‘Constable country’) and in 1809 he became engaged to Maria Bicknell, granddaughter of the rector of his home village, East Bergholt. Her family disapproved of the match, as Constable's career had made little progress, and he did not marry Maria until 1816, when his father's death made him more financially secure. The marriage was very happy, but Maria died of tuberculosis in 1828, leaving Constable emotionally devastated and with seven young children to care for. In 1824 his most famous work, The Hay Wain (1821, NG, London) had won a gold medal at the Paris Salon, but it was not until 1829, when he was over 50, that he was grudgingly made a full member of the Royal Academy, elected by a majority of only one vote. In 1833, buttressed by this new status, he began lecturing on landscape painting, showing impressive knowledge as well as great love for the subject. Although his skill as a lecturer helped to consolidate his reputation, by the time of his death he still remained only moderately successful. The biography by his friend C. R. Leslie, published in 1843, helped to establish his posthumous fame.

Constable's early work was strongly influenced by Gainsborough (likewise a native of Suffolk) and by 17th-century Dutch landscape painting (he revered Ruisdael in particular). However, he developed a highly personal approach by trying to communicate the feelings he felt in front of nature, conveying a sense—in his own words—of ‘light, dews, breezes, bloom’. Just as his contemporary William Wordsworth rejected what he called the ‘poetic diction’ of his predecessors, so Constable turned away from the pictorial conventions of 18th-century landscape painters, who, he said, were always ‘running after pictures and seeking the truth at second hand’. He thought that ‘No two days are alike, nor even two hours; neither were there ever two leaves of a tree alike since the creation of the world.’ In contrast to the much-travelled Turner, he never went abroad, and his finest works are of the places he knew and loved best, particularly Suffolk and Hampstead (at this time a village north of London), where he lived from 1821. To render the changing effects of light and weather he abandoned traditional ideals of smooth finish, using rough, vigorous brushwork to suggest the sparkle of sunlight, the movement of clouds across the sky, or the drama of storms. To many contemporaries his work looked unfinished, but Henry Fuseli was among those who applauded the freshness of his approach: C. R. Leslie records him as saying, ‘I like de landscapes of Constable; he is always picturesque, of a fine colour, and de lights always in de right places; but he makes me call for my greatcoat and umbrella.’

Constable worked extensively in the open air, sketching in oils, but his finished pictures were produced in the studio. For his most ambitious works—‘six-footers’ as he called them—he followed the unusual technical procedure of making a full-size oil sketch, and recently there has been a tendency to praise these even more highly than the finished works because of their boldness and freedom of brushwork. (The full-size sketch for The Hay Wain is in the V&A, London, which has the largest collection of Constable's work.) In England Constable had no real successor and the many imitators (who included his son Lionel, 1825–87) turned rather to the formal compositions than to the more direct sketches. In France, however, he was a major influence on Romantic painters such as Delacroix and on the members of the Barbizon School.