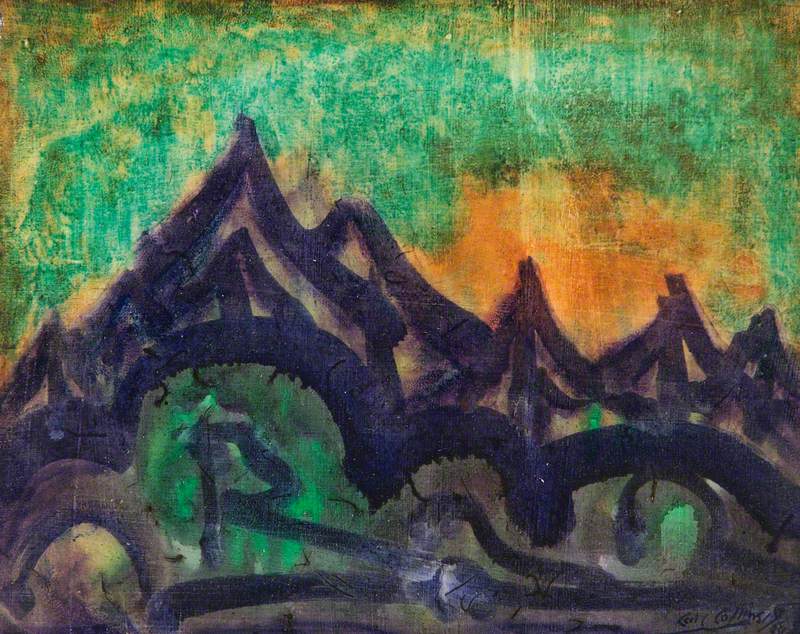 British painter of visionary subjects, born in Plymouth. He studied at Plymouth School of Art, 1923–7, and at the *Royal College of Art, 1927–31. In 1936 he took part in the International *Surrealist Exhibition in London, but he quickly repudiated Surrealism. He had a mystical outlook and was influenced by the prophetic writings of William Blake and by the American artist Mark *Tobey, who introduced him to the Baha'i religion and to the art and philosophy of the Far East (Tobey was artist-in-residence at Dartington Hall, a progressive school in Devon, 1931–8, and Collins taught there, 1939–43). In 1947 Collins settled in Cambridge and in that year published his book The Vision of the Fool, in which he explains his philosophy of art and life.

Read more
He attacks the ‘great spiritual betrayal’ of the modern world, ‘the betrayal of the love and worship of life by the dominance of the scientific technical view of life in practically all the fields of human experience’. The artist, together with the poet and the saint, ‘is the vehicle of the continuity of that life, and its guardian, and his instrument is the myth, and the archetypal image’. His own archetypal image was the Fool, who represented purity and spontaneity in contrast to modern commercialism and materialism. In 1940 he began a long series of paintings and drawings, originally entitled ‘The Holy Fool’ but later renamed ‘The Vision of the Fool’ in accordance with the title of his book; The Sleeping Fool (1943, Tate) is an example. His work also included the design of a large Shakespearean tapestry (1949) for the British embassy in Washington and an altarpiece (1973) for Chichester Cathedral. A retrospective exhibition of his work opened at the Tate Gallery a month before his death. His wife, Elizabeth Collins (née Ramsden) (1904–2000), was also a painter. During her husband's lifetime, her work was largely subsumed by his, but in the final decade of her life she exhibited paintings which have been described as ‘having affinities with the Russian folkloric art of *Chagall, *Larionov, and early *Kandinsky’ (England). She made a major bequest to the National Art Collections Fund through which works by Cecil Collins were presented to galleries around the United Kingdom. Further Reading J. Collins, Cecil Collins (1989) J. England, obituary of Elizabeth Collins, The Independent (8 February 2000)