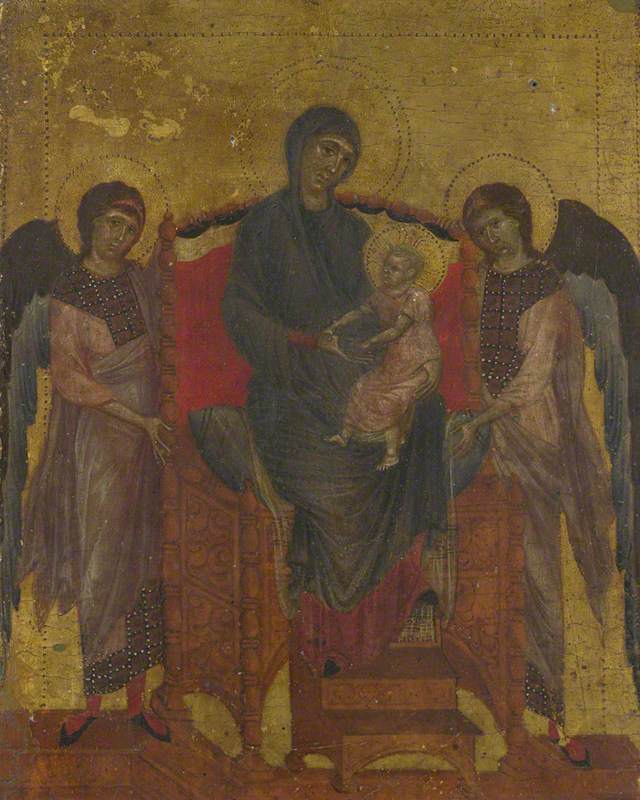 The Virgin and Child Enthroned with Two Angels about 1265-80

(b c.1240; d Pisa, ?1302). Florentine painter. His nickname means ‘Ox-head’ or ‘De-horner of oxen’, perhaps indicating that he had an abrasive temperament. He was a contemporary of Dante, who in The Divine Comedy (Purg. xi. 94–6) describes him as an artist who was ‘believed to hold the field in painting’ only to be eclipsed by Giotto's fame. This passage, meant to illustrate the brevity of earthly glory, has ironically become the basis for Cimabue's reputation, for, embroidering on it, later writers made him into the discoverer and teacher of Giotto and regarded him as the first in the long line of great Italian painters, the pioneer of the movement from Byzantine stylization towards Renaissance realism. Vasari, for example, places Cimabue's biography at the very beginning of his Lives and says that he gave ‘the first light to the art of painting’.

Read more
There is little solid evidence against which to test this estimate, only one surviving work being securely documented as Cimabue's, a St John forming part of a larger mosaic in Pisa Cathedral (1301–2). However, tradition has tended to attribute to him many works of outstanding quality from the end of the 13th century, such as the S. Trinità Madonna (Uffizi, Florence), a cycle of frescos in the Upper Church of S. Francesco in Assisi, and a majestic Crucifix in S. Croce, Florence (badly damaged in the Florence flood of 1966). If these highly plausible attributions are correct, Cimabue was indeed the leading master of the generation before Giotto. The movement towards greater naturalism, however, may owe more to contemporary Roman artists (Cavallini, Torriti) than to him; he is documented in Rome in 1272 and could have known their work.